0 Olympics: Rio’s golf course: Who plays it? Who pays for it? 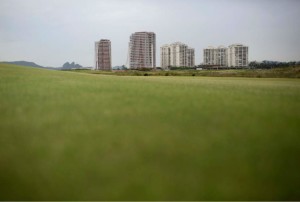 Four months after golf's surprising popularity at the Olympics, an even larger test remains: What to do with an acclaimed course in a country where few play the game, and in a city that can't pay to maintain it.

"You know that it's not going to be easy," Paulo Pacheco, head of the Brazilian Golf Confederation, told The Associated Press. "It's challenging. It's not easy to do. It's very hard. I think it's the only opportunity we have to improve golf in Brazil."

Everything feels unfinished around the course, except the course itself, which threatens to become a white elephant.

Billed as the first public championship-level course in the country, the layout is hidden behind several luxury apartment towers known as "Riserva Golf," which won't be completed until 2018. Cinderblock walls and fencing obstruct the view from the street, and no signs mark the entrance to the course in the western Rio suburb of Barra da Tijuca.

Once through the rutted parking lot and inside the clubhouse, there's no pro shop, few furnishings, no local club professional and no restaurant. And few players.

Only four middle-age men were on the course one morning this week, though the early rain showers didn't help. Even in good weather, attendance has been sparse in a city of 6 million that has only 1,500 golfers.

Brazil has about 20,000 players. compared to 25 million in the United States, and the game is played almost exclusively by the wealthy.

Another problem: Who will pay to keep the course running? Out-going Rio Mayor Eduardo Paes says the city can't pay. He has said repeatedly he would not have pushed to build the course were in not for the Olympics.

"It's not a popular sport in Brazil," Paes said last year. "But there are some things you need to do when you deliver the Olympics."

Last week, a state court froze Paes' assets as a public prosecutor investigates whether he improperly waived an environmental tax for the course builder. The builders' assets were also frozen.