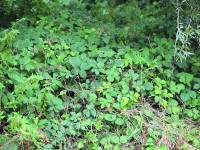 There have been some great articles in Pitchcare recently that have covered both ends of the weed spectrum. Japanese Knotweed, Ragwort and Giant Hogweed have been covered and raised awareness to the problems and health risks these invasive weeds pose. Common turf weeds have been covered well, too. Daisies, Dandelions and the other host of easy to control everyday weeds that form the routine of season in season out pitch and course management.

There is a group of weeds, though, that are hard to control, very common and thrive between the managed and unmanaged areas of courses and pitches alike - the twilight zone. They are some of the most aggressive, invasive and difficult to control weeds around, but often receive very little attention due to where they occur - the margins of the managed environment. I hope to give the inside track on how to get a grip on these weeds and, more importantly, why they are hard to control.

The bramble (Rubus fruticosus) was described by David Attenborough in the BBC's Life of Plants as the SAS of the plant world. One plant came over my fence last summer and, for the sake of investigation, I let it grow to see how far and how fast it would spread. I was surprised to find that it grew at one foot a week, and just kept going. I let it reach eight feet over the fence and stopped it in its tracks. Plants have yet to evolve a strategy that will overcome garden shears!

Anyone driving down the motorway or looking into the "waiting to be developed" building sites will notice the large pads that brambles can form if left alone. They will rapidly occupy and dominate any area, as they overwhelm and out compete almost all other plants.

So, how to control them? The cultural options are limited to physical removal. This can be a problem. The bramble is nature's barbed wire so, if removal by hand isn't an option, and prevention isn't an option, then what products are there to help in keeping them back? Before we look at this it is important to understand why certain products work and why some don't; why cultural control can only achieve so much and why both the cultural option combined with the intervention of a sprayer will always save you time and scratched forearms.

The usual products have little useful effect on brambles so a more specialist approach is needed. Brambles have a woody stem, and belong to the 'higher' plant groups. Due to their differing tissues and structure glyphosate based products tend to control foliage well, making short work of leaves, but glyphosate is limited in its ability to translocate along the woody stems and act on the lower parts of the bramble. Given time the plant will respond to incomplete control with secondary buds and start to grow again.

At this point many people would reach for the glyphosate again and spray the new growth. But, there is another way. There are a group of products that have specific activity on the woodier stemmed weeds. They are formulated to achieve high levels of penetration across leaves of more challenging plants (e.g. Rhododendron) with active ingredients that are highly mobile within the plant and more effective than most other herbicides. The active ingredients are Triclopyr, Clopyralid and Fluroxypyr and come in a range of products that are suited to sports turf use for treating the problem weeds that occur at the margins of managed grounds.

Brambles can be treated with a single application of products containing Triclopyr. Examples of this are Timbrel, Garlon 4 and Blaster. Timing is everything when using herbicides, so achieving a result that removes the need for repeat applications means taking advantage of the plants biology.

There is one aspect that all the plants discussed in this article have in common. They have definite parts of their life cycle that make it easy or hard for any herbicide applied to them to work. This is the nutrient flow within the plant and the direction it is going depending on the phase of the plant's life cycle. When the plant is undergoing strong vegetative growth it is channeling resources towards the growth points to fuel this growth. 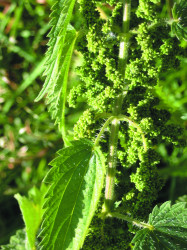 etation. When a herbicide such as glyphosate is applied to a plant that grows in this vigorous manner it is literally swimming against the tide of nutrient flow and is limited in its movement within the bramble. This is why, in April and May, success with glyphosate is limited. The key to improving the success of a treatment outcome is to not only use a specialised product for woody stemmed plants but to wait until the rapid spring growth spurt has slowed; late June and early July is the time for this. A single application at the recommended rate of products mentioned will save a lot of time cursing and dabbing bleeding scratches.

Nettles (Urtica urens) thrive due to their highly organised root system of rhizomes. This, and the silica needles that line their stems and leaves that dispense the stinging irritant, enable nettles to establish and spread with relative ease. The art of achieving control of nettles relies on delivering the herbicide to the rhizomes and the foliage.

Again, a highly mobile active ingredient is needed for this - some of the most successful ones being Clopyralid or Triclopyr. The same timing applied as with brambles. Wait until vegetative growth has ceased and then apply your product of choice. The active ingredient will then pick up an assisted ride to the rhizome network thanks to the nutrient flow traveling to them, delivering starches to store for the following year.

This controls the cause of the invasive nature of the nettle - the rhizomes. A well timed application will control a patch of nettles. Hopefully preventing potentially painfull reflection on why they ever got there!

Cultural control of nettles is very hard as they have evolved to react to trampling and interference through their rhizome network. Cutting them back will cause them to spread laterally, making new shoots appear around the cut area. One real solution is to dig out the rhizomes. This though is labour intensive and not guaranteed that all the rhizomes will be removed. 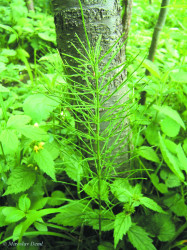 Horsetails (Equisetum arvense) are some of the most primitive plants that remain today. They have only the most rudimentary organisation in their structures - hence their spindly un-segmented leaves and stem. It is their simple nature that makes them so hard to control. As they are so primitive they rely on the thickest wax layer on any plant to protect them from water loss and pest predation. Horsetails are harmful to grazing animals so, for keepers of livestock and paddock owners, control is a necessity.

Horsetails prefer very damp conditions. They, too, spread from rhizome networks that spread extensively if left unchecked. Cultural control of Horsetails is a favorable option. If possible, manage or reduce the availability of the damp conditions that they require to thrive on. Improve drainage and allow water to drain freely and the Horsetails will die back gradually as the water they depend on is no longer available. If this is not an option there are some tricks to assist helping with any treatment that is necessary.

Most herbicides struggle to penetrate the wax layer that surrounds the horsetail frond. Any help that can be given to assist penetration will improve the uptake of a herbicide and eventual control. The leaf of the Horsetail is a tiny target to hit. It is very thin, making it hard to achieve a good overall coverage that is necessary to get good control from herbicides.

To get around both these problems trampling the horsetails down before spraying will help. Scuffing up the wax layer enables entry of the herbicide and, when laid over, the leaves form an easier target to hit. Triclopyr is very active against Horsetails and, if applied in the mid to late season, good control in the following years will be achieved. 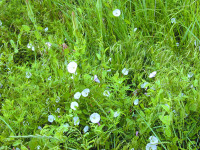 Most people recognise this unwelcome visitor as it climbs up and over a fence or comes up from under the fence. Field Bindweed spreads rapidly from May to August.

It spreads over ground by long stems that wrap around all other plants, fences walls and hedges in its path. As well as the over ground spread, Field Bindweed spreads under ground with an extensive root network. Cutting bindweed back is an endless task. It simply grows back. Trying to keep on top of it when established is like taking on the Chinese army - it just keeps coming. Cutting it back also stimulates secondary buds on the root network to break ground too. One way of looking at it is, cutting just annoys it and causes it to react even more vigorously!

Cultural control is hard. If it is present in a valued area with established desirable plants then cutting it back during its growth period is pretty much the only option. Sometimes it may be possible to use a handheld Roundup ready-to-use from a garden centre - being very careful to avoid contact with nothing but the Bindweed. Applying it to the established growth causes a quick response. It does also cause shoots to grow too.

As these appear keep 'picking them off' and be patient. The glyphosate has good activity on the root network and, after a sustained period of repeated treatment, will achieve control.

In areas that are of less importance without valued plantings, overall application will deliver a rapid response. The products mentioned above, particularly Blaster, will control the foliar and root networks in a well timed application with good coverage. The downside of this though is that other broad leafed species will succumb, so planning the application and performing a risk assessment are essential.

These vigorous and invasive plants are at their peak right now. Helped by an unprecedented amount of rain they are highly visible at the margins of areas that receive routine day to day management of our green spaces. It is when they cross the line into the realm of the everyday that the techniques I've discussed above will help.