0 On the wing at Twickenham 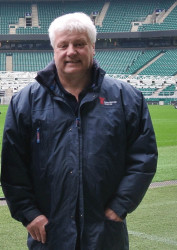 The RFU bought the Twickenham site back in 1907. It has seen many changes since, most notably the massive redevelopments in the last two decades. Everything about how the game is run and played in England stems from here. This is underlined by the way it is invariably referred to - with affection and respect in equal measures - as Twickers. It is a magnificent icon, the more so, if that is possible, since the introduction of a Desso surface last summer .

Keith is a busy man, a very busy man, but he's never too busy to talk about pitch care and tackling problems, however indirectly they might affect the quality of the pitch in his charge or its surroundings. We talk in the away team changing room. London Irish it says on the door. I broach the subject of pigeons and what they take - and leave behind - at huge arenas like Twickers.

"Pigeons are a menace," said Keith.

Four or five years ago, as an experiment, stadium authorities thought of actually letting them nest under the stands; a 5-star hotel for pigeons, as Keith described it. The eggs they laid were replaced with wooden ones. "It just didn't work. They are cleverer than you think," said Keith.
As far as the pitch itself is concerned it is the taking of the grass seed that is the main nuisance.

"We reseeded in December, right after the Varsity match," said Keith. "It's what I call 'a light refreshment' after the autumn internationals. There's always a three-week break before the next match when the Harlequins play their once-a-season home game here after Christmas. If it's mild, as it was this year, you may well get some good fresh growth under the lights. This does provide a feast for the pigeons though, and we have to take that into account."

"It is a bit of a gamble because you never know what conditions are going to be like. Not many rugby or football grounds seed in December like we do here, but it's a definite period of non-play for us, so it's worth trying to thicken the grass up," said Keith.

Post seeding time is when he gets most annoyed by the pigeons. "There's no two ways about it, they do come and pinch the seed. If you've got a bunch of twenty of them for, say, four hours, they can take a lot of it from an area. I'm sure they can smell it!"

In November, when there was no seed, pigeon numbers were noticeably down, Keith tells me. Some of them are there pretty much every day though, being just a nuisance, and leaving their 'calling cards'. On match days and just after, Keith says there are plenty of seagulls too, and they pose the same problems. "It sounds just like Brighton seafront here sometimes," he says.

But, it is the pigeons that are the abiding pest. "We've tried lots of ways to rid ourselves of them. Nothing really works but, since last September, we've reverted, once again, to having a bird of prey here regularly. It doesn't keep them away altogether, but it does stop them from treating the stadium as a home. They are day visitors rather than residents, you might say."

After the December Harlequins match, there were no games until England took on Scotland in the Calcutta Cup on the first weekend in February. Keith's pitch just gets better and better during this long spell without play, but the cleanliness of the stadium is at risk - from the air.

As Keith takes me pitchside, he points out a dozen or so pigeons roosting near the south end twenty-five. They fly off before I get a chance to photograph them. There is a good reason for this: the hawk man and his bird have entered the stadium 100 metres away at the north stand end. Keith even reckons they have a sixth sense and know when the birdman's van is in the car park.

"Our principal aim is to see that pigeons don't like the idea of making their home at the stadium," Graham tells me. He will be there for the next seven hours, five of them making Binki's presence felt. He will later take a close look at the pigeons' favourite nesting haunts to make sure none are there.

At Twickenham, much like other places in towns and cities where these birds gather, there is a mixture of feral pigeons, the unhealthy looking specimens you see at Trafalgar Square, and wood pigeons, the ones with white collars, now migrating into urban areas in greater numbers. It is the feral ones that pose the nesting problem. Graham says that Binki, just forty weeks old and bought from a Surrey breeder specifically for pest control work, does a sound job. Birds like her cost anything up to £400, so it's a serious investment.

Graham works for Tonbridge-based pest control firm Hawkforce, which has specialised in this kind of service for over five years countrywide. He is a professional falconer, one of sixteen which operate for Hawkforce, and owns a number of Harris Hawks for such work and his own hunting hobby. He also introduced me to Rio, another lady and an older bird whose place on the wing at Twickers has passed to Binki. She looked at home there though, and seemed to talk a good game. Why are they all ladies, I ask? "Males are a third smaller," says Graham, "their natural quarry is smaller and they're not cut out for pest control work."

The pigeon pest is perpetual. They nest and lay eggs year round. There is no respite, and Twickenham, Graham's favourite assignment, is no different. "You just have to keep at it," he says.

The Harris Hawk, native to the deserts of Arizona, Nevada and Mexico, is the bird of prey most used for this type of pigeon control. Its nature, reliable and non-aggressive, makes it ideal for scaring, not attacking. Binki, like all Harris Hawks, took six to eight weeks to train. They are very easy-going and pick up the training very easily, Graham tells me. I watch Binki as she roosts on the germination lights gantries then flies to Graham periodically as he walks around the pitch perimeter.

"The Harris Hawk is a very social bird," says Graham. "In the wild, they live in family groups. Binki, like all of her breed in the UK, was bred here, but they very much retain their natural characteristics. She regards me as part of her family group, as a parent and food source."

As her source of food, she watches Graham constantly. You can see where the expression "like a hawk" comes from. Graham tells me that the routine of walking around the pitch perimeter is perfect for the discipline trained into the bird. Wherever he goes she follows. He calls it 'following on'. Binki knows that Graham has food and she keeps him in her sights constantly. Every now and again he gets food from his shoulder bag, puts it on his glove and she flies to him at once. Hawkforce has a no kill policy, and Graham successfully scares the pigeon intruders with no harm done.

The more varied a Harris Hawk's diet the better. Day old chicks, mice, quail, supplemented every now and again by little bits of fresh chicken or beef. Graham must have an interesting freezer!

The key to a successful bird, he tells me, is its weight. Every day, before he starts work, he weighs each of his five birds. Each one has an optimum band in which it is most responsive. It's a bit like our body mass index. If a bird gets too heavy, it's not going to return to the falconer so readily and, therefore, flying is less effective. If it's too light, energy levels are insufficient for a day of effective flying. Binki looks beautifully fit. She has to be to patrol a large area like the Twickenham Stadium for hours on end. She's as fit as any winger at Twickenham.

I talk to Keith again. "Being a groundsman, you like nature," he says. "You always have to work with the way things are. That's the job. My instinct - and I'm sure that of all groundsmen - is not to wish pigeons any harm, you just want them to go somewhere else!"

"We've come to love the days when Graham lets his bird free in the stadium, and so do visitors here having a tour of the facilities. It's definitely an added attraction, as well as doing a useful job for us. People love to see the bird."

He recalls when something a little bigger was on the wing there. "Two or three years ago, for the big post Christmas Harlequins game, the organisers decided to use a sea eagle to deliver the match ball to the centre spot prior to kick-off. She had a seven-foot wingspan and her name was Nakita. She and her handler came here for the Varsity match three weeks earlier to get her used to the big screens and crowd, and she had the rest of the month to get familiar with flying in the stadium.

"On match day, the idea was for her to fly from the north to the south stand and then deliver the ball, held in a net, to a perch on the centre spot. In the middle of her flight she veered off to the west stand and perched there briefly. She must have lost her bearings because of the crowd. She then flew to the aforementioned perch with the ball safely in the net to one of the biggest roars I've ever heard at Twickenham. It was surely the best performance ever on the wing here. I don't think we had pigeons here for a while after that!"

"I love to see the hawk each week, especially when she sits on the lighting rig. It's a delightful sight."

Twickenham's busiest month is looming. In May, it's wall-to-wall rugby - the county cup finals over the first weekend, the World Sevens the next, with over 50 games, then, later in the month, the Aviva Premiership final, followed by England against the Barbarians. There may not be so much time for the pigeons to settle on the pitch, but Binki's end of season performance will be vital.