by Robert Bradshaw
in Industry News
on 16 May 2012

4 One direction for One Leisure's Head Groundsman, Rob Bradshaw ... up! 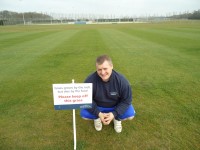 Twenty-nine year old Rob Bradshaw has already been in the turfcare industry for twelve years. In that time, he has amassed qualifications that include PA1/PA6 certification, passed courses for Winter Pitches, Cricket, Synthetic Surfaces (with diplomas with distinctions), and holds all tractor and hand-held machinery certificates.

Rob began his career working for Huntingdonshire District Council, where he maintained twenty-four football pitches and various other 'green' areas, including parks and housing estates. In September of 2010, his passion and enthusiasm was recognised when he transferred to the One Leisure multi sports complex in St Ives, Cambridgeshire.

He relished the chance to take on a fifty-two acre site with just two groundstaff; himself and one part-timer, sixty-eight year old Dave Hartley.

"We are only a small team," says Rob, "but we work very well together. We share the same work ethic and have similar abilities."

The athletics arena is used by Hunts Athletics Club and Cambridgeshire meets are held as well. "We keep our grounds to a very high standard. Constant cutting in different directions, brushing and general housekeeping duties, along with regularly aerating when conditions allow, give us the playing surfaces we want."

"We spend a lot of time on our cricket squares and, with it being a Minor Counties ground, and as many as two hundred fixtures in a season, we have our work cut out, as you can imagine!"

"With there only being two of us, we work tirelessly to get the best results. If this means working overtime, whether it be working early or late, or even coming in on our day off, we make every effort." 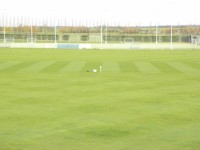 "Presentation is the key to success, and it's our aim to present quality pitches for paying customers."

"Since I've started at One Leisure, I have completed various courses to improve my skills, and I am currently in the process of finishing my on-line diploma in Sports Turf Science. So far, I've achieved the highest grades and, hopefully, the outcome and final markings will be excellent."

"A lot has changed since my arrival. The overall presentation of the site has improved immensely, not so much as with the football and rugby pitches as Dave kept them at a good standard, but other areas, such as the cricket squares."

"On my arrival here, I introduced organic products to the square, garlic, seaweed and carbs and, with regular aerating and the use of these products, we have seen the roots go from varied depths at 65-80mm to 150mm. With very limited resources, and a very tight budget to boot, we do exceptionally well." 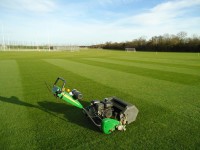 In the eighteen months I have been here, I've worked very hard to be where I am now. I won Employer of the Year for the site, and recently won an Unsung Hero from the local paper, The Hunts Post. This award was for outstanding achievement locally.