0 One good finish - deserves another!

What's the definition of an 'excellent finish'? Well, if you ask the loyal fans and everybody else associated with Scunthorpe United, the answer will undoubtedly be the club's terrific 3-2 win over Millwall in the recent League One play-off final at Wembley! 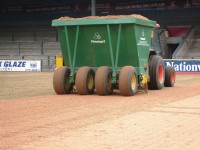 This well-deserved promotion, which marks a return to the Championship, means that the club will be up against some big names next season. Of course, apart from the obvious challenges that this will bring, the whole team at Scunthorpe will also be conscious that the playing surface at their ground must be 'up there with the best of them' so that home games truly reflect their professionalism.

Fortunately for Scunthorpe, the second 'excellent finish' has already been presented to them - courtesy of Simon Hutton from Lincolnshire-based Fineturf. Simon takes up the story.

"We had already been working on the 'Iron' pitch prior to their spectacular end-of-season win, so it is pleasing to see that our work will be playing an integral part in the club's exciting new lease of life." 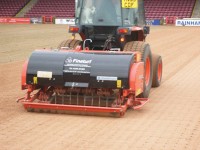 Simon outlined the work that has been undertaken, starting with a waterlogged area that had been causing some problems.

"An area behind one goal was holding water, so we excavated this down to the formation level. The compacted material was removed and replaced by a 70/30 rootzone mix. Finally, we incorporated a 0.9% fibresand and levelled the area."

"The top 20mm of the pitch was then removed (using two passes with a Blec combinator), but being careful not to take out any of the existing fibresand. The remaining vegetation was then collected and the surface vacuumed using a Trilo." 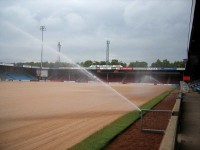 "We then applied 80 tonnes of Mansfield Sand over the whole pitch, and re-seeded it by drilling in four directions," explained Simon.
"The application of sand is one of the fundamental operations in any pitch renovation project - the selection of the right grass mixture is obviously another."

Simon points out that there is not much point in making a really professional job of all the work prior to the seeding operation, if you are then prepared to jeopardise the success of the whole project by using a non-professional mixture.

"Our reputation will largely hinge on the quality of the grass which establishes - because that's what everybody in the stands will be looking at next season."

Consequently the mixture selected was MM 60 - this grows into a dense, hard wearing sward with a good winter colour. The four perennial ryegrasses used (one of which is the new top rated variety Madrid) are all treated with Headstart. 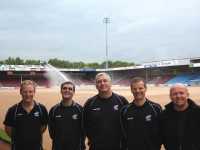 "This safe, user-friendly seed treatment is worth its weight in gold to me because it encourages fast germination in ideal conditions, yet acts as an insurance policy if the weather conditions deteriorate in the early establishment phase. Quite simply, in some situations the Headstart will make the difference between success and failure."

The final part of the work at Scunthorpe involved aeration down to 225mm (using a Wiedenmann), the application of 18 bags of Prostart fertiliser (6:9:6) followed by dragmatting to achieve the finished level.

"As I said earlier, it is great to feel a part of this club's return to the Championship and everybody here at Fineturf will be eager to see Scunthorpe consolidating their success on the upgraded pitch next season," concluded Simon.