4 One man, one international airport-300 acres of grass

One man, one International Airport-300 acres of grass 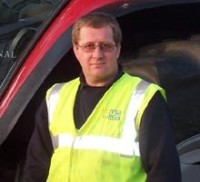 There are 300 acres of grass here at Cardiff International Airport that has to be maintained all of the time. There are some lesser areas that don't really require the same standard but I pride myself on keeping it all to the same standard. At least 65% of the prime grass, the clear and graded strip, is around the main airfield. This area has to be guaranteed safe for aircraft and contains all the grass within 150 metres from the centre line of the runway.

The clear and graded strip should be maintained as a bird deterrent habitat. The surface levels should also be reasonably level and the ground firm. Manholes should have a lead up to them of 110 degrees built in concrete. The main reason being, should an aircraft need to leave the runway for any reason that it come safely to a halt with the minimum of damage.

In terms of bird control the CAA specifies a long grass policy, which means the grass is maintained at 150mm (6"). You can allow the grass to grow up to 200mm but you must trim it back again, two inches or 50mm at a time so you are not creating a foreign object debris problem, in other words, that we are not leaving bundles of grass lying about. We have to use a mower that will cut the field and distribute grass cuttings evenly across its entire cutting width.

Cutting a maximum of two inches of grass off should not cause a problem to aircraft. There was once a problem many years ago, where management decided that the first cut of the year, which is now a silage type cut wasn't economical. We couldn't predict the weather at the time, and we were caught out with an explosion in growth. There were a lot of grass clippings laying on the top and a jumbo jet came in and unfortunately picked up all the grass and blew it everywhere, it was a damp day and it stuck on the runway. All flights had to be delayed while the grass was removed from the runway.

These days at least the runway edges are kept to the specified criteria at all times. During the growing season, it is very difficult to cut the grass at or around six inches, because every time the grass is mown we are encouraging the grass to create a new leaf, so over cutting can be as bad as undercutting. You have to find a balance between not cutting too much off because it could create a problem for aircraft and not cutting too often because the grass thickens too much. The grass is already very thick here, because we are in the west and it is wet and mild, we get tremendous grass growth here, which perhaps Heathrow and Gatwick wouldn't encounter because they don't have the rainfall.

The CAA deems that six inches is the optimum level to keep birds away. You will always have resident crows and magpies, so the airport employs a birdman to be on duty 24 hours a day. He uses a Digi-scarer; a machine which transmits distressed bird calls of different species. The birds should then come to him to see what the distress call is and once they are there he uses a banger cartridge to drive them off from the airfield.

Birds and aeroplane engines don't mix and it is obviously a big problem world wide, the potential damage is probably worse than the actual accidents but potentially a bird or flock of birds could cause an engine to fail. There is a weight limit of bird that the authorities consider non problematical, which I think is 120 grams. 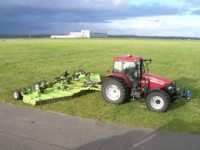 As well as the consistent height of grass, we have to keep away any food source for the birds as well. I aim to keep the grass about 95% weed free. Weeds have nicely coloured flowers, the nice coloured flowers attract insects and the insects will attract the birds.

If there is an annual bunching weed that dies back, you get a bare patch that will help more weeds to grow and will allow birds to land and feed on that bare patch for worms and grubs.

I keep a careful eye on everything in the area to ensure that nothing will attract birds to it.

Where there are bare or damaged areas, from weed die-back or maybe from remedial work, I use a spring tine grass rake and am quite severe with that. I rake the area as many times as it takes to get an inch of tilth and then overseed with a specialist grass seed mixture which contains a type of tall fescue, a very spiky inhospitable grass. Once sown I make the bird control unit aware because by putting seed down I am providing another ready made attraction for the birds.

We are very fortunate here not to have had a major problem with grubs and insects on the airfield itself, in the last four years we haven't had to use any insecticides. 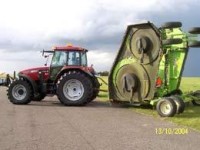 However there was a day this year when pilots were complaining about flocks of swallows. It was a very warm humid day and we have quite a lot of arable farmland around us. Basically the aphids were rising off the crops and causing us a problem. The airport authorities asked me what could be done. I suggested that we could spray, although the neighbouring farmers wouldn't be very happy with us. I had looked at the forecast and there was rain on the way, sure enough the next day the rain came and there wasn't a swallow in sight.

Another neighbour was actually growing peas in a field just off the end of the runway and I saw the same thing happen there, flocks and flocks of swallows like a cloud and they recorded the problem on the airfield. I rang him up and he said that there wasn't an insect problem with his peas; in fact he got quite shirty about it. I met him to view the problem and he was apologetic and thankful that we had diagnosed the problem before the insects ruined his crop. He rang me back to say thanks and that he would spray his crops immediately.

We have to monitor what goes on in the local area; the type of crop will determine the type of predator. We have no control of what our neighbours grow, we just have to monitor and adapt. For instance, oil seed rape is a good crop for attracting pigeons. They fly in flocks, they fly quite low and so could be a major hazard. I report back to the bird control unit what is being grown where and what the potential problems are. Another problem is ploughing. We have a 40-acre arable field on the end of the runway and when they plough it we have serious problems with the birds coming down to feed on the worms.

The grass is looking healthy at the moment; I use a high phosphate fertiliser in the spring after our first cut, to encourage it to come back quickly. The fertiliser contains very low nitrogen so as not to encourage excessive growth.

Unfortunately the majority of the airfield consists of weed grasses. The CAA adopts a policy that if you were going to sow new grass you should use a recognised seed mixture but in most cases that seed mixture would be crowded out by the naturally occurring grasses of the area within perhaps five to six years and there is just not enough money available to keep reseeding. I am looking for a good thick, good quality grass cover. Typically our grass contains a bit of rye grass, annual meadow grass, cock's foot and timothy, it can look quite non descriptive, there's a bit of everything in there. I am in constant contact with the control tower, I cannot move without them knowing where I am and where I am going. As soon as an aircraft comes on the horizon I am moved 150 metres minimum away from the runway.

I am the only member of staff involved on the grass maintenance side of the airport and last April I became an employee of Emcor Facilities Services, which was when we went to contract. While I do all the seasonal mowing and maintenance, I call in the services of a local contractor to do the bailing in the spring. In airfield terms this first cut is known as a bottoming out cut, which is basically a silage harvest.

Unlike other airports such as Heathrow and Gatwick, the ground here is heavy clay and I cannot get on the land any earlier than the end of April beginning of May. In some places the grass can have grown to 18 inches in height after the winter.

During the year we don't do any scarifying because there simply isn't the time or manpower to do those operations. Scarifying is limited during the first cut when the contractor uses a V rake to move all the cut grass into rows ready for bailing. Because the first cut is taken down very tight, to about half an inch, the V rake removes a lot of the build up of organic matter during the previous seasons growth. All of the grass collected on the first cut is used for forage, bagged up and taken for animal feed. The money we make from this offsets the cost of the contractor. 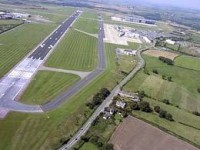 At the moment I am still cutting the better areas every 2 - 3 weeks and the worst areas I probably wont have to touch again. I had planned to be finished by now, but the weather has been too nice and let me down.

Other than that I hope to do a bit of rolling. We have hired a ten-foot roller in the past for about a week each year. A ten-foot roller though does not make a good contribution to working on an airfield. This year I have made a capital purchase of a 20-foot tandem roller. I'm hoping that I will be able to roll straight away, before the ground conditions change. We have some ruts across the airfield and I just need to iron them out before the ground becomes too soft.

I think by this time next week I will be taking the mower off and I will be looking to cut hedges then. Around the perimeter there is some hedge laying to do as well as the removal of some trees, to prevent birds nesting.

Then there will be the annual maintenance of the machinery and servicing of the snow equipment. I'm on call in the winter to do runway de-icing, because I only live fifteen minutes away. The sprayer is tested every year to the national sprayer testing standard so we have a piece of paper saying that it has been calibrated and checked, for safety reasons. I'm also fully qualified in PA 1,2 and 6, so I'm covered adequately for doing the job as well.