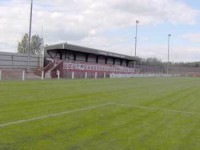 I am always on the look out for interesting stories about sports facilities. In particular, I believe it is important to recognize the contributions and efforts of all individuals and groups who selflessly look after these valuable resources.

I had heard some comments about a football pitch deep in the heart of leafy Shropshire. Shifinal Town had, apparently, one of the best playing surfaces around so, without delay, I decided to investigate further. I met up with the club chairman, Glyn Davies, a man who wears several other hats - Secretary, Fixture secretary, Fund raiser, Social Club Manager, Groundsman, maintenance man and bar man to name a few. There is not a job; he has not done for the club in the last 40 years.

His love affair with the club began when Glyn who, in the early 1960's, played for both the Wolves and Nottingham Forest Football Clubs, but had to pack up playing due to injuries and was approached to help out the local Youth Club team.

His first role at Shifnal was in a coaching capacity, taking responsibility for the Shifnal youth club team, which had just started playing in the local Wellington league and two of his brothers were playing for them. As the club, and teams developed so the name was changed in 1972 to Shifnal Town, the club managed to lease some land from the Local Council to provide them with their own pitch facilities. Over the next 10 years the club was transformed, adding other facilities such as a clubhouse and stand.

1985 was to bring catastrophic news; the Council informed the club that they were intending to sell off the land for a housing development.

Understandably, Glyn was concerned for the future of the club after all the hard work that had been put in by himself and other committee members. However, he persuaded a local landowner to sell the club 5.5 acres of land, thus giving them opportunity to develop their own permanent ground and facilities, but while the new ground was under development the team had to drop down to local County league football and play back at the Idsall School from were they had started.

With funding from the FA and other local organisations, plus a lot of voluntary help, the club managed to raise enough money to buy the land, construct the pitch, re-site the stand and build changing room facilities. Quite an achievement for a small local club.

In 1989 the new pitch was constructed. Blakedowns undertook the work with a large cut and fill operation, removing existing topsoil, re-grading and re-modelling the sub soil structures, and then replacing the topsoil. Drains were not installed because the sub soil profile was predominantly sand, a free draining material. And the club had to keep down the costs and Glyn has been maintaining the pitch ever since.

As the club got promotion up the local leagues, the facilities at the club continued to expand and improve. When they reached the Midland Football Alliance League, however, significant developments were needed to meet the League's criteria. 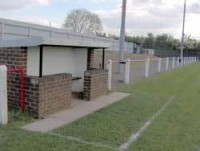 The playing surface at Shifnal is excellent, and it is all down to the dedication, hard work and interest of Glyn. Over the years he has constantly tried to improve and produce one of the best playing surfaces around. The achievement is all the more amazing when you consider he has little machinery at his disposal and the fact that there is no irrigation or drainage installed.

In the past the club were reasonably well off, making good money on they're bar facilities and tote plus fundraising. However, in recent years, with the drink driving laws and the formation of the National Lottery, money is not so easy coming. Pitch maintenance is limited to what is absolutely necessary. 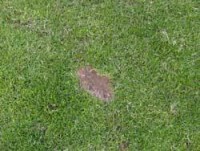 The pitch is mowed 1 to 2 times a week during the growing season and maintained at a height of 20mm using a set of Huxley TR84M Hydraulic three gang cylinder mowers towed by an Iseki TX2160 compact tractor. There are problems; the tractor tyres flatten the grass before it is mowed, leaving a striping affect on the pitch. On the plus side, the grass clippings provide a food resource for the grass providing the thatch is not allowed to build up.

Fertilising is restricted to two or three applications a year, one in the spring and one during the end of season renovations in May. This year Glyn is using a 12:6:6 N K P granular product for both the growing season applications, with an application of 3:12:12 in the Autumn waiting of course for the ground conditions to be suitable (moist with rain forecast) as there is no irrigation available.

Aerating is restricted to localised hand forking and hiring in, at the end of the season, a linear aerator (Earthquake) to de-compact the grou 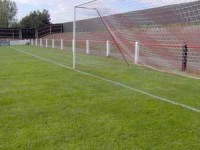 Any weed growth is spot treated with a selective herbicide or removed by hand. Contractors who sprays with a residual herbicide usually tackles weed control around the ground, hard surfaces etc. once a year.
At the time of my visit, the second week in May, there was hardly any wear in either of the goalmouths or linesmen's' runs. The condition was quite amazing considering well over 50 games had been played on the pitch.

Glyn's mission is not yet complete. He hopes, one day, to secure enough money to install the desperately needed irrigation and drainage systems that would make the maintenance of the pitch so much easier, and which would give the turf the necessary environment (moisture, nutrients and adequate air) for healthy, sustainable growth.

Having seen what Glyn has produced with such limited resources, it would be interesting to see what could be achieved were the additional resources to become available to him and the club.