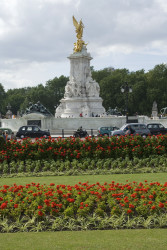 "After the concert we were left with severe compaction in the area behind the temporary stage," says Assistant Park Manager David Ellis. "This area had been used as a 'bone yard' to store staging equipment while the stage was being erected and later, as a lorry park for production units as the concert got underway. We had several BBC outside broadcast vehicles on site during the performance, which following the stage set-up activity meant the area withstood a substantial amount of weight."

Terrain Aeration employed their largest terralift machine, Airforce along with the smaller lighter model, Airforce Scamper to treat the area, inserting a one-metre probe and injecting compressed air at two metre spacings on a staggered grid pattern. "This ensures that compaction is broken up over the whole underground area and fractures and fissures are created providing air channels from one metre depth to the surface," the company's MD David Green explains. Dried milled seaweed was injected on the final air blast, (which, as it swells when wet keeps the fracturing open) and the probe holes were filled with Lytag aggregate.