by Peter Driver
in Industry News, Machinery & Mechanics, and Golf
on 07 Aug 2015

Jacobsen mowing equipment, built at the company's manufacturing facilities in Ipswich, UK and Charlotte, USA are maintaining the Rio Olympic Golf Course as golf returns to the Olympic Games after a 112-year absence 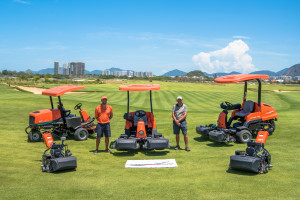 After winning the exclusive supply contract for the mowing equipment, Jacobsen machines have been mowing the course for the past 15 months as construction finished and grow-in progressed.

By the time the first test event takes place early in 2016, a total of 35 Jacobsen turf maintenance machines will be employed at the course. During the Olympics, the course will be in constant use for 14 days and a team of Jacobsen technicians will be running the maintenance facility to provide 24-hour support.

Englishman Neil Cleverly was appointed course superintendent in June 2013 and has worked closely with Gil Hanse, the course architect, whose design was chosen as the preferred option from eight high profile entries. Hanse was voted 'Architect of the Year' by Golf Magazine in 2009, the same year that one of his designs, Castle Stuart in Scotland, was considered to be 'The Best New International Course'.

The mix of grass species is an interesting one with Zeon Zoysia used extensively on tees, surrounds, fairways and roughs, while SeaDwarf Seaside Paspalum is used on the greens. Both species are drought tolerant and the Paspalum is also saltwater tolerant, which is important as the quality of the irrigation water will be variable. 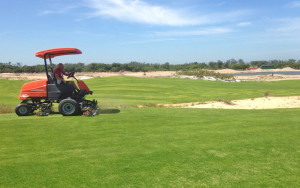 Alan Prickett, Managing Director of Ransomes Jacobsen in the UK said, "We are, once again, delighted to be involved in the Olympic Games and it continues a tradition that goes back over many decades. This was a particularly important win for us, as it marks the return of golf as an Olympic sport after more than a century, and it is sure to be one of the high-profile events at the Games.

"One of the deciding factors in our winning of the contract was that we have a distributor in Brazil. ProGolf has represented the Jacobsen brand in Brazil since 2012 as well as Ryan, Turfco and Smithco; three companies with whom we have excellent working relationships across the globe. ProGolf's core business is golf course construction and they are working as sub-contractors at the Olympic course."