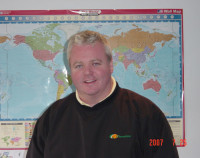 Due to Floratine Product Group's continuing worldwide expansion, the corporation has appointed Conor O'Neill as Manager of International Operations.

Based in Marbella, Spain, Conor who brings a wealth of experience to the role having previously held the position of Business Development Manager for Club Car after working for Jacobsen for many years, will be responsible for opening up and supporting new markets in Europe, Africa, and the Far and Middle East.

Combining his new post with a Floratine distributorship covering Spain, Tunisia and Morocco, Conor is looking forward to the move. "I've been familiar with Floratine and the Floratine philosophy for years," he says. "It will be great to put it into practise."

David Snowden, Floratine's Technical Director says that Conor's knowledge of the international golf market, coupled with his expertise in customer relations make him ideal to fill this new position. "Floratine are presently operating in over 40 countries world wide, excluding the U.S.A.," he says. "I'm more than confident that Conor will drive us even further."