by Rosie Duckworth
in Drainage & Irrigation
on 15 Oct 2018

With The Open Championship returning to Royal St George's Golf Club in 2020, the south coast club has chosen Toro irrigation to ensure the famous old course is looking its best when the world's top golfers arrive in under two years' time. 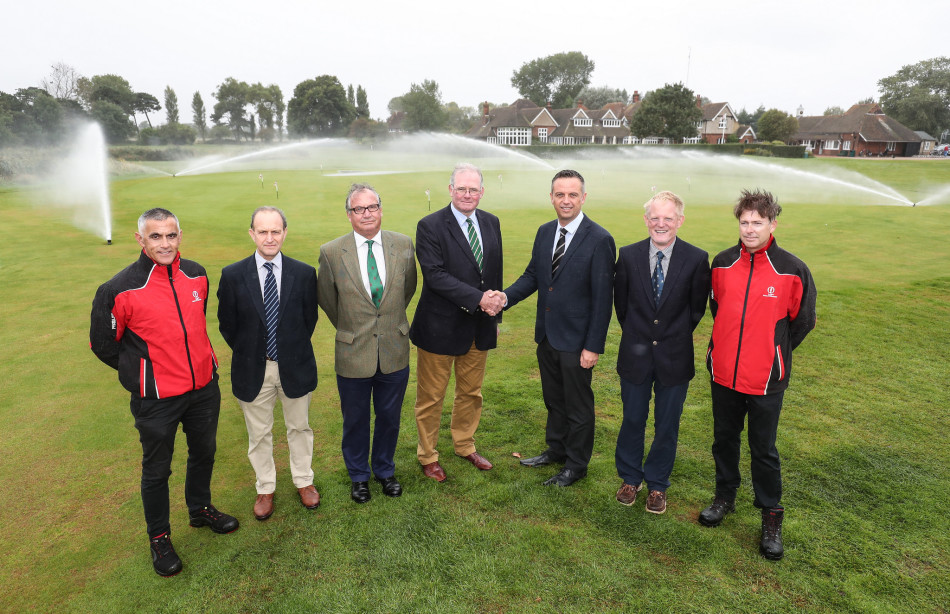 The simple rationale which pushed course manager, Paul Larson, into lobbying for a Toro irrigation system, when the club made the decision to replace the existing 20-year-old one, was accuracy he says: "I want to irrigate in millimetres and not in minutes."

Now in place and guaranteeing the kind of accuracy Paul was after is Toro's Lynx GDC system from Reesink Turfcare, an official Toro UK distributor. He says: "In fairness, the alternative system we looked at did offer the type of accuracy I was looking for, but while I could achieve three millimetres of water on a specific part of the course with one click of a button on the Toro system, the other system required some calculations and seemingly two or three clicks."

Complete with pump and weather station integration and installed with a course map and Toro's round-the-clock support in their handheld and NSN apps, the club's adoption of the Toro system might not have been the case had Paul not given Rob Jackson, irrigation field sales manager at Reesink, the chance of a trial on a small patch of the golf course.

"I told Rob that I'd more than likely stay with the original system provider but that I was happy to learn of anything new as I like to be open-minded. And I'm glad I did. What I found was that Toro was easier, better and more suited to our course. I've had full confidence in the company and the system ever since. Everything has been first class," revealed Paul.

"We have Infinity sprinklers on the greens, surrounds, approaches and fairways, which give us 360 degree spread, and we can control every head on every sprinkler individually. This morning I have had someone out taking moisture levels everywhere on the course and, for example, if we find a reading of 24 percent at the back of a green and a reading of 18 percent at the front we can set the sprinklers to level it out. My goal is round 20 percent," said Paul who added that the tees have the FLEX B series, with main nozzle multi-trajectory adaptors. "Everything is just so easy to adjust; we are currently tweaking everything so that it will do exactly what we want."

Paul continues: "The user friendliness means that I am able to sit with my tablet and control the system remotely, safe in the knowledge that we are irrigating the areas that require it and not wasting water by irrigating the rough or tee banks which was happening with the previous system."

One area of the course which is benefiting greatly from the new system is the pathways, which now have over 1000 Toro 590G sprinklers with Precision Rotating Nozzles (PRN's).

"Our paths were in poor shape," says Paul. "We kept turfing them but it just didn't last, so now we seed with a fairway fescue, something we can do because with the dedicated sprinklers we can keep them irrigated. It's too dry down here for the paths to survive without it."

Installation expert, Ocmis, was able to use most of the original pipework, just replacing all the joints and heads, with only a small amount of new pipework so disruption was minimised.

"The work was carried out over the winter and finished by early spring and by closing a hole at a time there wasn't much disruption to the golf," said Paul, who is looking forward to preparing the course for what is always a spectacular Open at Royal St George's.

Club secretary, Tim Checketts, was part of the panel which had put in place a rigorous tendering process designed to ensure the club would identify the best new irrigation system for them.

"At the end of the process Royal St George's Golf Club was quite clear that Toro's irrigation system offered us the significant uplift in capability we had been looking for. We felt that Toro gave us the ability to use less water and target it precisely where we wanted it to go and in doing so the new system would support our strategy to encourage the growth of the finer fescue grasses while reducing the percentage of broadleaf grasses on the course.

"Ocmis was chosen as our preferred contractor recognising its track record in delivering major projects to cost and on time and its reputation for tidy and professional work. The company deserves great credit for completing this project despite the considerable challenges posed by the 2017/18 winter," said Tim.

"As a result of this successful project the Club now enjoys the use of a highly capable irrigation system and we are well placed to ensure the delivery of the course in Championship condition for 2020."