0 Open support “the best ever” 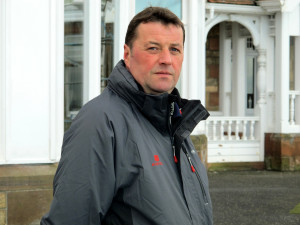 After Phil Mickelson's historic win at The 2013 Open, Muirfield course manager Colin Irvine has reflected on the support he received for what he described as "extreme greenkeeping".

Colin's team for The Open included 11 of his own staff plus nine from other Open venues to help with the daily mowing schedule over the two week period from July 8th, as well as nine other local greenkeepers for the week of the tournament, plus support staff from local dealer Sherriff Groundcare and John Deere, as official suppliers of golf course maintenance equipment to The 2013 Open Championship.

"Sherriffs staff were up the week before the Championship, with extra support machines coming in to make sure everything on the course was in tip-top condition ready for the practice days from the 14th," says Colin Irvine.

"We really didn't have many problems with the mowers, but those we did experience were dealt with promptly and efficiently.

"The overall support we got from John Deere and Sherriffs before and during the tournament was terrific, everyone did a great job to keep things running smoothly - we even had the dealer's general manager Richard Scott and John Deere territory manager Richard Charleton washing the machines down and clearing away divots from the practice tee at the end of each day!

"John Deere's territory customer support manager Alan Harron was also a great help to our own technician Steven Satchwell in keeping all the machines properly serviced and ready for work the next morning.

It has been the best tournament support we've ever had at Muirfield, and even other greenkeepers and course managers helping out said they were impressed with the level of support we had." 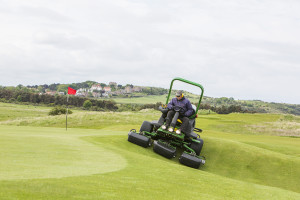 In total 20 John Deere machines were supplied to complement the course's own fleet, including 7500E and 8000E hybrid electric fairway mowers, an 8800 roughs mower, a 2653B tees & surrounds mower, 180SL (with groomers) and 220SL walk-behind greens mowers, along with a 1026R sub-compact tractor with collection system, plus TE electric and HPX diesel 4x4 Gator utility vehicles with trailers.

"It was crucial for us at Sherriffs to have the support machinery that we sent into Muirfield correctly set up to the specifications that Colin Irvine requested, so they matched up to Muirfield's own John Deere fleet," says Richard Scott.

"Our service technician John Blair was then on site for a week before the tournament to assist Muirfield's mechanic Steven Satchwell in preparing the course's own, already well maintained, machines, and our service manager Stevie Burrell was also helping behind the scenes to keep everything running smoothly.

"The support team quickly established a daily routine, which worked like clockwork, covering any and every job that needed doing - everyone mucked in when required and operated really well together throughout the fortnight.

"It was a real honour for Sherriff Groundcare to have the opportunity to contribute to such a prestigious event, and we all thoroughly enjoyed it - it was a truly great experience!

I feel that Colin and his team set the highest possible standards for The 2013 Open, and it was a privilege to be able to work alongside them."