3 Opening doors with an R&A scholarship 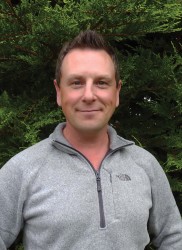 The objective of this article is to introduce you to a few R&A scholars and how they managed to manoeuvre themselves into a position to be offered a place on the Greenkeeping Scholarship Programme. Prior to this though, I will talk you through a brief history of the scheme.

In 2004, The R&A created a scholarship programme for greenkeeping students which, to date, has been given to 120 lucky, or should I say, talented, individuals. The package given depends on the course you are studying, whether you are a full or part time student or whether you are an online student, with amounts ranging from £1,000 up to £5,000.

The scholars are spread across the world, including China, USA, Hungary, Iceland, India, Nepal and Estonia, and benefit from not only this cash injection to help them, but also numerous other benefits which I will mention a little later on.

First, we turn our attention to an interesting character, Ott Avango, and how he managed to be offered a place on the programme. Ott is currently studying for a BSc (Hons) at Myerscough College but, prior to this, was a student of Elmwood where he gained an HNC and an HND in golf course management.

Ott is from a tiny village in Estonia called Kärdla, and he started his greenkeeping career at Visby Golf Club in Sweden, which he describes as being "one of the best in Scandinavia". During his time there, Ott was honoured to be part of the club's reconstruction and design by none other than Pierre Fulke, the former Ryder Cup star, before 'upping sticks' and moving to Norway - Haga Golf Club to be precise.

Ott informed me that, whilst working at Haga, the club held the Ladies European Tour and that it was played in the worst rainy conditions imaginable! I have been a greenkeeper for nearly twenty-five years, so I feel your pain Ott!

Scotland was Ott's next move and a jump into full time study. As I mentioned earlier, Ott is the proud holder of an HNC and an HND and oh, by the way, he managed to finish the HNC with a little prize entitled 'The Toro Student of the Year Award'. For most guys this would do nicely, but not for Ott! He went on to complete his HND, where he won the award again!

Along with the award came a trip to Vegas and the GIS show, so well done Ott, let's see if you can complete a hat trick of awards for your upcoming BSc study. Did I mention that Ott can speak four languages, too!

If you are looking for someone with experience of top golf courses and competitions, then Craig Harrison is your man. He has plied his trade as a greenkeeper at Loch Lomond during the Scottish Open, then moving on to Queenwood to gain experience as a seasonal. Next stop was Sunningdale, where Craig helped with course preparations for the final qualifying rounds for the Open, before hitting the jackpot and securing a seasonal position at Royal Lytham for a small competition called the Open Championship.

Craig was part of the team that gave us a fantastically presented Open track, and was given the task of hand mowing tees for the duration of the competition - no mean feat for a relative newcomer to the Lytham greenstaff.

On talking to Craig, you get the feeling that it shouldn't be too long before he is directing his own golf course, either as a head greenkeeper or a course manager; watch this space!

Ian Nichols came into the greenkeeping industry having previously working in finance in the city. Since his move over to our industry, Ian has progressed smoothly from an FdSc degree, which he passed with distinction, and then subsequently into a BSc (Hons) degree where he hopes to graduate in July next year.

Ian is currently a greenkeeper at the home of golf - the Old Course nonetheless! Ian mentions that he would like to point out the fact that he is now forty-two and that the scholarship award is not solely reserved for young people (life begins at forty doesn't it Ian?).

Having worked as a banker in the City of London for twenty years, Ian's department was closed down during the latest financial crisis and, as a consequence, he was made redundant. Not being one to dwell on the negatives, and after considering many options, he decided to take on the challenge that is greenkeeping, so he got himself onto a degree course at Myerscough College and took the long move up north from Essex to Preston to begin his new career in the turf industry. 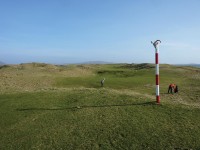 Ian mentions that the scholarship award is far more important than the sum of money granted, and that it is a potential door opener, giving access to wonderful information and contacts within the industry, which he plans to continue to use after he completes his studies at Myerscough; the city's loss is greenkeeping's gain if you ask me!

Tom started in the turf industry, aged fifteen, at his local golf club, Poulton, where he worked as a summer seasonal to gain much needed experience. From there he thought he would try his hand as a groundsman at Fylde Rugby Club, Lytham; just to make sure he wasn't missing out on anything, that is!

Tom got himself enrolled on an ND Sportsturf course at Myerscough College, which he then followed up with an FdSc in Sportsturf Science; this was whilst working as a seasonal in Norway. The FdSc degree in question ran concurrently with his time as a seasonal at Miklagard Golf Club, Norway's number one course, according to Tom.

Showing his true colours at Miklagard, and during his brief time there, he was placed in charge of spraying practices and several pieces of spraying apparatus. Here comes the big one! Even though Tom is just a twenty-one year old, he is, wait for it, Head Supervisor of Skei Golfklubb, just north of Lillehammer. Tom mentions that Skei Golfklubb is possibly the highest altitude golf course in Scandinavia - never mind spraying apparatus Tom, you need breathing apparatus to maintain the course!

He is keen to point out that he works under the consultancy of Miklagard's Head Greenkeeper and that his future plans are to keep maintaining high altitude golf courses, and to one day be involved in a project to build a course inside the Arctic Circle. Aiming high seems to have been Tom's outlook on his greenkeeping career, and there aren't many who can say they have gone this high up, literally!

It's not all study being an R&A scholar you know. Early this year, the Myerscough scholars were invited to Fife to partake 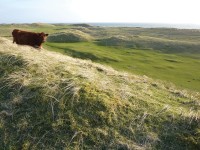 in a golf match against the Elmwood scholars which was held on the New Course, St Andrews. I am pleased to say that team Myerscough came away with a convincing victory.

Involved in the trip was a chance to visit the St Andrews golf museum, a guided walk around the greenkeepers maintenance facility with Gordon Moir (Links Superintendent) and a marvellous evening meal too. I am happy to report that a great time was had by all!

The programme also has a dedicated website and Facebook page which we can all share any questions or issues related to golf course management and study.

For twelve R&A scholars per year, there is the chance to be invited to study the most natural golf course in the world - bold words, but probably true!

The course is Askernish, which is situated in the Hebridian Islands just west of the coast Scotland. Askernish Golf Course was originally designed by old Tom Morris, but fell into disrepair for years. It was located again by master greenkeeper Gordon Irvine with the help of Chris Haspell (course manager of Castle Stuart), Martin Ebert (R&A advisor) and Adam Lawrence (Editor of Golf Course Architecture), and is probably the most enjoyable golf course that I have ever played in all my time as a greenkeeper. 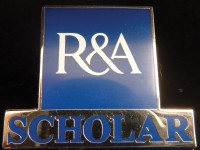 The course lies on a patch of land called the Machair, a protected site with rare flora and fauna such as the stunning Irish Ladies Tresses wildflower, and the noisy corncrake, a seasonal feathered visitor to the island.

I was honoured to be a part of the group which visited the island early last year. I took away with me many fine memories and new friends, which I hope to have for the rest of my life, all courtesy of the R&A's scholarship scheme. I could go on for hours about my experiences of Askernish, the scholarship programme and all its benefits, but Laurence Gale has only given me 1500 words to play with, so maybe next time.

May I take this opportunity to thank Dr Andy Owen and Stewart Brown (Myerscough College); Dr Paul Miller (Elmwood College), and the super R&A team of Wendy Cole, Phil Russell and Steve Isaac for all their help and assistance in making the scholarship programme a huge success.


The R&A Scholarship Programme, which began in 2004, provides an annual contribution towards costs incurred by students attending institutions delivering the course.In the UK, The R&A currently offers assistance to students at Elmwood College and Myerscough College, with the most promising students being selected for scholarships based on a set of criteria agreed with The R&A.

Applicants undergo a rigorous interview process to ensure that those selected to receive a scholarship will go on to be first rate ambassadors for the greenkeeping profession, their college and The R&A.

To date, The R&A has contributed towards the higher education of students from countries all over the world, including China, Hungary, Iceland, India, Nepal, Slovenia and South Africa. The colleges provide The R&A with progress reports on the student's performance at the end of each academic year and, if they continue in further education, the renewal of their scholarship is dependent on them attaining an adequate level of achievement.

This year saw eleven new students join the programme at Elmwood College, four of whom are from the UK, with the others coming from Germany, India, Ireland, South Africa and the USA. Five scholars from last year are continuing their courses into a second year.

Of the eleven UK students from Myerscough College, three of them are undertaking online courses, with nine previous scholars now into their second year of study.