0 Opening Time at the City of Manchester Stadium 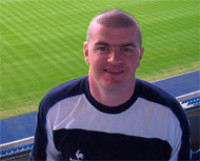 After a very busy summer to say the least, all the preparations are now complete and the pitch is ready to be played on, the next 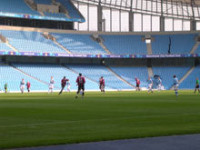 This was quickly followed by a friendly versus Barcelona, then a European training night to precede our first European game in over twenty years, the opponents being Total Network Solutions from Wales. 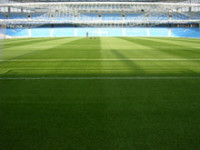 Something else we have never had is a virtually flat surface-the old pitch had a crown of 18 inches from touchline to the centre of the goal; here we have such a gentle rise it is barely noticeable.

We have also been applying regular applications of Amino-Sorb R, Activate F and R and K-Sorb from Rigby Taylor, to help promote good early root growth which will in turn start to wrap its way around the newly installed Desso Grassmaster system we have installed within the playing surface. The actual grass area itself is almost 9,500 square metres, over 1,000 more than our previous ground and does require a bit of juggling about when it comes to chemical 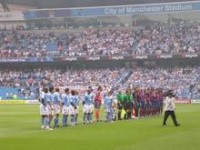 The Barcelona game went well, the pitch played brilliantly again and a restricted crowd of just over 36,000 saw City win 2-1.

The difference in time, divotting, has been halved already compared to the old pitch, which is a major relief. Divotting is probably the most tedious job that we all have to undertake! Other Groundsmen had told me previously, and we are now seeing first hand for ourselves, there are no actual divots-just scars that seem a lot easier (at the moment!) to 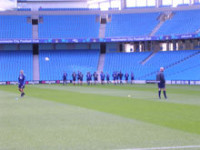 The European training night brought TNS (Total Network Solutions) to the City Of Manchester Stadium for an hour of training, this is a part of the UEFA Cup rulings that means that they are allowed to do this, so depending on how we fare in the competitions then away teams will 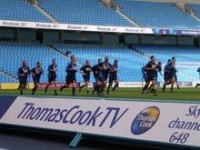 A quick twenty-minute divotting session was all that was needed afterwards and home we went after the first of what was to be three consecutive days working late.

The following day we didn't cut the pitch until late morning, because the match was a night game, we wanted to minimise the amount of time the grass had to grow. We then marked the pitch and put the portable goals and corner flags up. An added bonus at 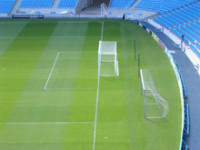 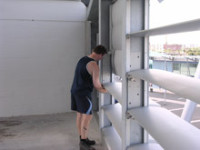 One downside we do have, is that for safety reasons, the louvers that are in all four corners of the stadium have to be shut for events. This creates a temporary halt to the great air movement we have in the stadium. In the picture is our apprentice, Gary Conway, shutting the louvers prior to the crowds entering the stands.

The game was played and once more the pitch played well, the final score was a 5-0 win to City, with the second leg at the Millennium Stadium in two weeks time.

The following day, the pitch was brushed with the Dennis cassette mower to help stand the grass back up and also to lift up the 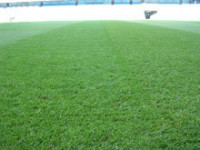 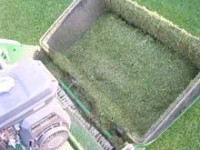 Once the pitch was brushed, we gave the pitch two quick cuts with our new Toro 2000 Reelmaster-once in each direction. The pitch was then fed with a 15-0-10 liquid fertiliser mixed in with Amino Sorb R which will help the roots to go further down. We haven't taken a sample to check for root growth since our consultant; Gary Owen from PSD, came about four weeks ago. At the time the roots were down around 5 inches deep, so next week we will check to see how much improvement has been made in that time.

Once all of the above was done to our satisfaction, all the Ground staff managed a well-earned weekend off. The staff have all worked hard getting the pitch ready for the season opening and we haven't even played a home league game yet!

All that is left for me to say is good luck to everyone out there, regardless of the sport or level of play, for the coming season.