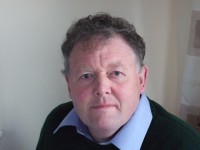 Golf Course Managers have a major responsibility to uphold our golfing heritage by preserving our 'original golfing turf' in the UK. Such turf comprises a blend of the fine fescue and browntop bent species, a mix which has been well proven to be the ideal sward for the game.

It is often worthwhile to look backward as an aid to seeing the way forward. For instance, when most inland courses were founded they had natural fescue/bent turf as they, in the main, were built on infertile land of poor agricultural value. Even the majority of courses constructed on heavier soils were sown out with primarily fescue/bent dominated seed mixtures, certainly not annual meadow grass. I have yet to see a bag of this grass seed on the market in all my time in the profession!

Our ideal fescue/bent turf has, of course, been under threat from various sources for many decades; from mass liming, basic slag and bone meal treatments in the twenties, to over-watering, granular compound fertilisers and serious compaction becoming prevalent in the sixties.

The modern curse cast on our long suffering "original golfing turf" with respect to golf greens, is the ever increasing "quest for speed", and the detrimental mowing (and verticutting) regimes that are being advocated and practised at certain golf clubs. Excessively low mowing heights (i.e. 2mm or lower) and excessive verticutting carried out on a regular basis clearly and uncontrovertibly encourages annual meadow grass domination.

To mow greens in the UK. at 2mm can best be described as another "short-term fix" to accommodate player demand (led more often than not by the better players), with scant regard for longer term implications. Importantly, fescue/bent turf can, of course, be maintained at two or three times this height and still provide suitably paced surfaces. 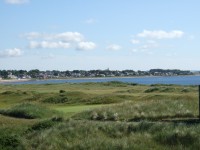 Many golf club members see "fast" greens as the utopia and something they must have regardless, perhaps thinking that consistently fast greens will improve their putting averages and, therefore, their scores. There is often a bit of "one-upmanship" thrown in (a dangerous game in itself) but, however, the reality is that for Mr. Average's scoring in the majority of cases is no better and, in fact, usually worse. What is more, the time taken for his round is invariably increased!

Yes, we need minimum ball roll resistance to achieve decent green speeds, along with other attributes, in order to realise the full potential of the game on any course; but there is a fine balance between the sublime and the ridiculous regarding green speed, especially on contoured green surfaces with major run-offs.

It is, surely, a major priority within a golf course manager's remit to identify the real potential of the course, or courses in his charge, and how this potential may be realised. There can't be too many sites across the country where existing green structures are unable to support a reasonable percentage of browntop bent grass, with proper management and a little investment. It goes without saying that even a 50/50 bent grass/annual meadow grass putting green sward performs vastly better than 100% annual meadow grass.

There are no "miracle" cures in fine turf management, just good old-fashioned, common sense greenkeeping methods, aided by modern equipment, products and technology, the latter three of which our predecessors did not have the benefit of.

Turf performance must be the key, not colour, pretty patterns, excessive green speeds, or any other disguises, if true quality turf is the aim.

However, smooth and true annual meadow grass surfaces may be presented, they cannot match the resilience of fescue/bent turf due to botanical composition, especially when mown at 2mm! Good golf greens need to provide for correct ball/turf interaction (check on dry turf), quite apart from the required putting criteria. Only golf played on true quality turf gives just reward to well-struck shots from tight fairways (a requirement for premier ball control) due to the firmness and, in particular, the resilience of the turf on the green or approach.

Ideal ball/turf interaction is not possible on annual meadow grass greens, reptans included, commonly classed as "dead" greens, wherein most, if not all of the residual spin on the ball is negated on the first impact at most times of the year. Conversely, control is virtually impossible if said greens are hard and dry!

This, of course, is the result of an inherent lack of the necessary extensive and dense fine hair root system allied to the "softer" plant tissue (and organic matter) characteristics of annual meadow grass. Listen for the echo, or lack of it, when bouncing a ball on the green! Suffice to say, ball/turf interaction is a much deeper and interesting subject beyond the scope of this article.

It has to be said two key bodies in particular, The R&A and STRI, are doing sterling work in "spreading the gospel", although they are often preaching to the converted.

What is urgently needed, in conjunction, is the effective education of the golfing public, stressing the significance of the only ecologically and economically feasible management of golfing turf in the UK.

After forty-six years in greenkeeping, covering heavy agricultural parkland, chalk downland and links courses, I remain convinced this is based on a dominance, at least on main playing surfaces, of two perennial species, fine fescue and/or bent grass cultivars.

Any such education venture would require the PGA Tour, the Golf Unions, golf journalists and, even more importantly, televised golf presenters to join the band, all singing from the same hymn sheet! A tall order indeed considering the mostly negative influence of televised tournament golf, especially on the general golfing public.

However, success is not only dependent on a wider recognition of practicable fine turf management. We have to accept the fact that, broadly speaking, target golf has been pre-eminent in this country for a long time now, and this is not the natural game. Noticeably, golf equipment has evolved to suit this transition and also needs examination. 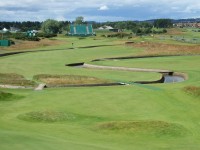 Another unhelpful aspect is the numerous new courses, including modified existing ones, which, over the years, have been conceived on the "American" or "target" golf principle, instead of traditional British design, which fosters the ideals of the original game. Sadly, such abominations still occur!

Returning to the positive side, The STRI have to be congratulated for their recent initiative involving Turf Performance Measurement in their new Agronomy Programme. This is, without doubt, a most progressive development, whereby measured data for the key elements on greens, i.e. smoothness/trueness, firmness, pace, moisture (resilience to follow?), not forgetting consistency between greens (for which the stimpmeter was developed, not as a rod for the greenkeeper's back), can only help reduce the over emphasis on green speed, which exists everywhere as the only (false) measurement of green quality within the game generally.

In conclusion, that elite ambassador of quality turf, Mr. Jim Arthur, would turn in his grave at the thought of 2mm mowing of greens, an absurd practice which, at present, is totally contradictory to the future well-being of the game in the UK.

I consider that it would be imprudent, to say the least, to travel down this "road to perdition", not only because of the damage to the profession but, equally importantly, the negative influence on young, up and coming, ambitious greenkeepers - the course managers of tomorrow.

Surely, common sense must prevail, for it would be criminal to lose our world renowned golfing heritage, the original game.