Visitors to Osborne House - simply referred to as Osborne - will have little idea of the splendour that awaits them, as the building is offset from the main drive and also obscured by specimen trees. It is this privacy that particularly appealed to Queen Victoria and Prince Albert as they sought refuge from Royal Court duties in Windsor and London.

The royal couple purchased the Osborne estate in 1845 and, on the advice of London Building Contractor, Thomas Cubitt, the existing Georgian building was demolished and a new Italianate styled house built.

It was constructed in red brick and concrete rendered to 'suit the Queen's privy purse'. At the time it was believed that Osborne had the largest area of concrete rendering in the UK. This exterior layer was sculpted and painted to resemble stone.

Prince Albert laid out the gardens and lawns and, along with the Queen and their nine children, was responsible for planting a good number of the stunning specimen trees, many of them in memoriam.

It is hard to imagine Queen Victoria as a beautiful and sexually active young woman, as our image of her is often prejudiced by photographs of her in later life. She is understood to have thoroughly enjoyed the 'practising' and begetting, disliked being pregnant as it got in the way of her 'activities', and found her children an annoyance for not dissimilar reasons. She was, by all accounts, totally besotted with Albert and, following his death in 1861, went into a period of mourning that lasted for forty years until her death in January 1901. 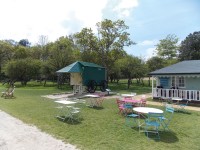 That said, there is much evidence around the 350 acre site that points to both a contented and educational childhood; the Queen Victoria Beach, opened to the public in July of last year following restoration of the pavilion and bathing machine, being where Victoria became the first royal to learn to swim, followed by her children.

Current custodian is Head Gardener, Toby Beasley, who confesses that it has been something of an eye opener to see inflatable crocodiles being carried through the woods to the beach as visitors search out the 'royal experience'.

"It's proved something of an attraction," confesses Toby. "We had over 50,000 visitors last August alone." 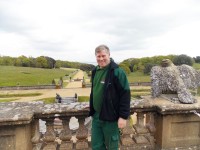 Toby trained at Writtle College and has been at Osborne for seven and a half years, the last five as head gardener. His experience was brought in to oversee the completion of the walled garden restoration. He is supported by a team of nine who maintain all the formal gardens around the site.

All other grassed areas are maintained by ISS Facility Services Landscaping, who retain two full-time staff at Osborne but, along with Toby, also look after Carisbrooke Castle; more of that later.

Toby is responsible for the horticultural aspects on the sites and works closely with Andy Turner, South East Regional Landscapes Manager for English Heritage, who is responsible for the wider grounds maintenance and arboricultural issues, whilst Alan Cathersides, the Senior Landscapes Manager of the non-departmental public body of the British Government provides technical back-up when required.

Walking the site with the three of them, it was refreshing to enjoy their banter, but also witness their passion for the job in hand. There was much bandying about of Latin names for various shrubs, grasses, trees et al, as I listened on rather perplexed! 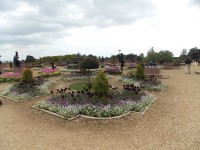 On such an extensive site it is perhaps difficult to know where to start, but it becomes clear that Toby has immense pride in the vast terraced gardens at the front of the house that are, quite simply, beautifully maintained and, in mid-May, were a riot of colour, with tulips still in full bloom following the late start to spring.

Toby explains that the bedding plants are sourced from island suppliers as he believes that, having being grown in the local eco-climate, they will suit the native soil better. The tulips are bought from a supplier in Kent.

The grass borders have, until recently, been cut with Hayter Harriers, but a few issues with them has resulted in new Honda rotaries being purchased. 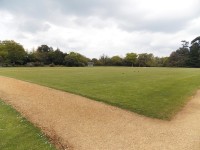 From the terrace, the view down to the sea takes in the Broadwalk. Either side, where once were manicured banks, acidic grass now grows which is designated as a Site of Importance for Nature Conservation (SINC). There are two other SINCs at Osborne. In the distance a huge oak tree, which came down in late 2011, is slowly being removed. Toby explains that the area is so wet that getting machinery to it is proving difficult. They will have another go later this summer.

To the back of the house is a huge expanse of grass known as Durbar Lawns. Toby says that these areas, apart from vertidraining, are maintained much like sports turf, and are regularly sprayed for disease, topdressed and overseeded.

It is here that concerts are held, with over 8,000 coming in to see Simply Red perform. "Rather less for Steps," says Toby with a smile.

"If the weather forecast looks poor, we are able to use the parking facilities at nearby GKN Aerospace in Cowes," explains Toby. "This helps enormously to reduce damage and wear to the lawns. The visitors are then transported in, using our fleet of minibuses." 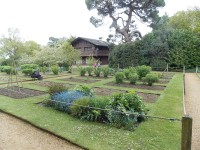 It is one of these minibuses that takes us to our next destination; Swiss Cottage. As we travel through the extensive woodlands, Andy Turner explains that these are managed by a volunteer team of fourteen, with any tree surgery carried out by arboreal contractors.

All trees across the site are surveyed on a fifteen month rotation basis. This ensures that they are checked at various stages of their growth. Fortunately, Ash Dieback has not yet reached the island.

Once the drop off point is reached, it is a short walk to the Swiss Cottage. It looks, as you might expect, like a typical Swiss chalet, but Toby explains that its construction did not use traditional methods. It was built solely for the children's use and everything inside is to a seventy percent scale. 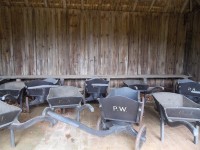 To the front of the building are nine garden plots - one for each child. Here, the young princes and princesses were able to grow their own produce, selling it back to the main house so as to understand business finance.

Each child was supplied with their own individually labelled wheelbarrow and cart. These are now on display in a small thatched building, the bricks having been handmade by the children, who also helped with its construction. These garden plots are now maintained by Toby's team and the produce is still sent up to the main house.

To the right of the chalet is The Albert Barracks, a model hill fort consisting of a star shaped defensive moat and guardroom. Again, the bricks were handmade by the children. Mini canons and an attack moat complete the play area, which was continually enjoyed by three generations of royal offspring. To the rear of the chalet is an area of wildflower meadow where rare orchids grow. There is also a small museum where stuffed specimens from various hunting trips, from less PC times, are on display, including a five-legged deer!

As we head back to the main house and our final destination, the walled garden, we pass a nine-hole golf course that, whilst it sits within the boundary, is a private members club maintained separately from Osborne.

Restoration of the walled garden was completed thirteen years ago and is now tended by Toby's team, with assistance from twenty-five volunteers. No records exist of how the gardens were originally laid out, so they have been planted up with flowers and shrubs that would have been available prior to 1901. 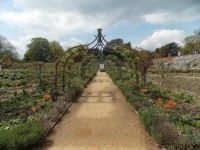 Local flower arrangers pick the flowers to produce displays for the house throughout the summer. The walls and pagodas have apple trees trained up them, and Toby says that, when in full growth, they look spectacular. He even has a mind to produce Osborne Cider from the fruit!

As we return to the main house to complete my visit, we pass further lawned areas and specimen trees. "These lawns aren't perhaps in the best condition," confirms Toby, "but there is a good reason for this as there are four species of rare fungi that grow on them. One is actually no larger than a blade of grass!"

Under the governance of English Heritage and the considerable skills of Toby and his team, visitors to Osborne are guaranteed a most rewarding day, regardless of whether they come armed with picnic hampers or inflatables. 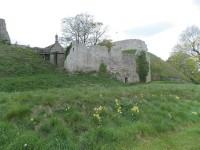 Carisbrooke Castle occupies a hilltop central location on the Isle of Wight. Queen Victoria's youngest daughter, Princess Beatrice, made the 800 year old castle her home for much of her life whilst she was Governor of the island

Carisbrooke Castle is a historic motte-and-bailey castle dating back over 800 years. It is situated almost smack bang in the middle of the Isle of Wight and commands stunning views through 360 degrees. Over the years, it has been much altered and extended.

Its main claims to fame are that Charles I was imprisoned here for fourteen months before his execution in 1649 and, afterwards, his two youngest children were confined in the castle. It is here that Princess Elizabeth died. Most recently it was the home of Princess Beatrice, youngest daughter of Queen Victoria, in her role as Governor of the Isle of Wight from 1896-1944. 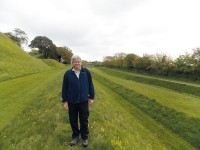 Surrounding the castle are large earthworks, which were begun in the year before the Spanish Armada. They were completed in the 1590s. These, and the lawned areas inside the castle wall are maintained by ISS, using Kubota ST30s to cut the grass. The steep banks are left to grow wild and include a number of rare plants.

There is also a bowling green, but this was never the manicured surface we know today, although the sport was very popular in the 17th century. It was built for Charles 1 during his internment. The high banks on the edge of the green originally formed part of the artillery fortifications. The natural amphitheatre is now used for small concerts and historical reenactments. Inside the castle's walls, the grounds are mainly laid out with paths and lawns and, with over 120,000 visitors a year, areas of the lawns can be subject to high wear, especially those of interest to children, such as the four miniature canons perched on a bank.

The site is particularly important for bats, with nine of the fifteen species found in the UK resident in and around the castle; more than any other English Heritage site in southern England. These include Bechstein's, Grey Long Eared, Natterer's, Serotine and Greater Horseshoe. Evidence of Pipistrelle bats roosting in the chapel can clearly be seen by the scrapings at the top of the door - there appears to be no gap to get through when closed! 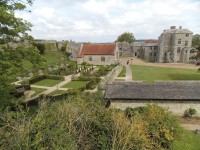 A recent addition has been the Princess Beatrice Garden which was designed by award winning garden designer and TV presenter, Chris Beardshaw.

Here, all the planting had to take into consideration archaeological importance, so all the shrubs along the walls have been planted in submerged containers to retain their roots, whilst other planting has a membrane below to act similarly.

The Yew hedge at the head of the garden is shaped to mirror the top of the window in the chapel.

Toby and Andy oversee all grounds work at Carisbrooke Castle. 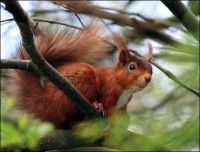 The Isle of Wight is a stronghold of the red squirrel. They are found, although rarely seen, at Osborne, but are not resident at Carisbrooke Castle. There are no grey squirrels on the island.