When it was time for a hole four refresh at Bedfordshire's John O'Gaunt Golf Club the par three hole on the John O'Gaunt course was enhanced by a 1500m2 lake with two Otterbine fountains and eight Toro Infinity sprinklers. 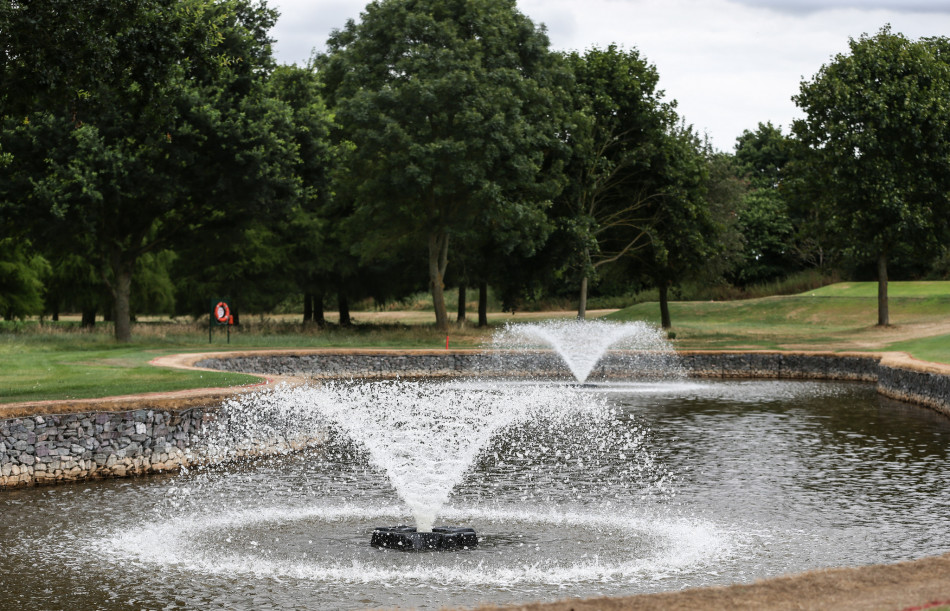 Course manager Nigel Broadwith explains the reasons behind the renovation: "Constantly improving the two courses is of paramount importance to the long-term success of the club. The fourth hole on the John O'Gaunt course has always been a picturesque hole, however, its location on a floodplain meant it was susceptible to flooding. The renovations included raising the fairway level to take this into account, as well adding to its beauty with a new lake."

Nigel, and head greenkeeper Kevin Armstrong, chose two Otterbine Sunburst aerating fountains, from UK distributor Reesink Turfcare. Both are three horsepower units but one has a one horsepower impeller for the smaller end of the lake and the other has a two horsepower impeller for the wider end. The reasons for these choices were primarily aeration, to the keep the water clean and clear all year round, and secondarily for aesthetic purposes.

Nigel continues: "We wanted to make this lake a feature of the course and therefore wanted an aerating system with the capabilities to present a fountain. The lake is in a slightly windy position and what appealed especially with the Sunburst is the fact that the fountain has a heavier droplet, which means the wind wouldn't blow the droplets away and disrupt its presentation. It's a lovely addition not just to the hole, but the course."

Four years ago, John O'Gaunt's Carthagena course had its irrigation system updated to Toro Lynx and Golf Decoder Controller irrigation system, operated with dual trajectory series full or part circle sprinklers, and as that concluded it became the turn of the John O'Gaunt course. This time Nigel chose Infinity:

"The system on Carthagena has performed brilliantly," he says. "It was always the plan that we would move straight on to updating the John O'Gaunt course sprinklers after Carthagena, and as we finished Infinity launched in the UK. I was immediately impressed with their accessibility for maintenance and made the decision that we should try this new technology on the John O'Gaunt course."

The addition of four Infinity sprinklers on the fairways and four on the greens too, means that Nigel is half way through renovating the 18 holes on the John O'Gaunt course with Infinity. Nigel says he aims to have the remaining nine updated within the next three years.

According to Robert Jackson, irrigation field sales manager at Reesink, this is a classic example of how the little things can make big differences, he says: "The inclusion of a fountain in a new or existing lake can so easily elevate it to being a beauty spot. Similarly, the John O'Gaunt course installation shows how innovation through renovation can be easily and gradually applied to an irrigation system."

If either appeals, Reesink Turfcare is just a phone call away on 01480 226800 to helping make this happen.