0 Our man in Brazil-The Opening Ceremony

While FIFA's damp squib of an opening ceremony didn't float everyone's Amazonian boat, the football has been explosive so far.

England's stoic performance wasn't converted into victory through missed chances, Brazil had a nervous start and were lucky to get a penalty at a pivotal point and Holland thumped an unrecognisable Spain.

The pitch at the new Manaus stadium had come under some media fire in the weeks preceding the England game. This was unfair not least because the groundsmen there are faced with the situation of preparing a World Cup standard pitch in a remote part of the world with an unforgiving climate. There's practically no overland transport, especially not now in the rainy season where the churned-up mud roads make it impossible for anything but the most powerful 4x4 vehicles to slog through. This journey can take weeks. 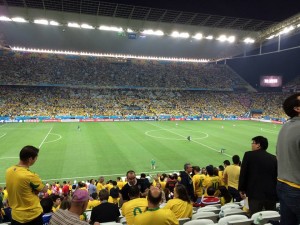 Therefore, fertilisers, grass seeds and products must be shipped or flown there - some go missing, some don't arrive. The groundstaff there should be applauded for the achievement of preparing this pitch to the standard it's at now. Certain areas looked like they needed a bit more time, though as Steven Gerrard was quoted as saying before the match; it is the same for both teams.

Fingers crossed England can beat Uruguay in Sao Paulo on Thursday to have any chance of going through to the knockout rounds.

England have played Uruguay ten times, winning three, drawing three and losing four of these games. The last was a 2006 friendly where England won 2-1.

Going back to the opening event, something that only just briefly flashed on our TV screens was interesting and deserved more air time.

It was the first kick of the World Cup and was by a paraplegic man wearing a thought-controlled robotic suit. Converting thoughts into mechanised actions - amazing. 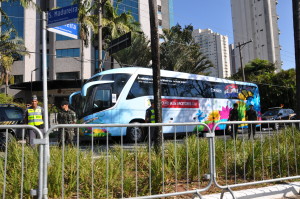 This kick was the first time anything like this has been demonstrated in public and it was a shame the event happened without more build-up and explanation. The technology offers the potential for disabled people to gain some more mobility by recording from the brain and then translating that signal into commands for the robot suit to move.

The kick was the tip of an iceberg in terms of the development of this technology and research, under the banner of The Walk Again Project, is being led by scientists at neurorobotics laboratories here in Brazil.

The pictures are from the opening Brazil - Croatia game, taken by a friend who had tickets. Also, as a side-note, on the way to watch this match in a bar I passed the bus about to carry the Croatian team to the stadium.