0 Our man in Brazil- How the Brazilians do it

Although it was bitterly disappointing to see them knocked out at such an early stage, at least any England fans such as myself can now relax and watch the remaining games without palpitations.

Everyone has seen the results, match analysis and comments about the various World Cup games, so I'll try and write about something different - the atmosphere. 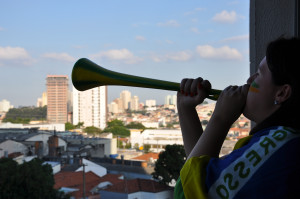 Football is more than a way of life in Brazil - it is life. Whether it's an escape, an excuse to dress up as a supporter, a passion or just something to do, football flows through the country like a vaccine through the veins.

Fans are fanatic in the true sense here. One supporters group for the football team Corinthians now command such fear and power that they are consulted by the club itself before every new player signing.

Hosting the tournament seems to have brought out all of the positive aspects of this passion, with everyone pulling together towards the ultimate goal of winning the World Cup on home soil.

Many of Brazil's roads, buildings and bridges have been painted yellow green and blue, streets have been decorated with flags and banners. Chocolate World Cup trophies are available in supermarkets and memorabilia is being peddled literally everywhere. 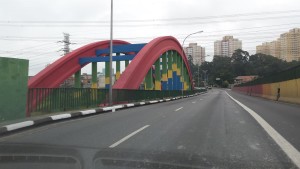 The country has been dressed up and now it's a perfect excuse to have another carnival further to the February craziness. And Brazilians love a party.

Some areas of cities are closed off when there is a game and festivities spill from pub to street and back again. Cheap instruments that howl, hoot and make all kinds of noises are available everywhere and when the Brazil team score a goal, cities erupt into crescendos of noise.

The opening Brazil game meant an official holiday for some parts of the country including Sao Paulo and every other game the host nation are playing equates to a day's holiday which is unofficial, yet widely recognised.

FIFA Fan Fests are not a new concept but I would say they have been taken to a new level here with the Rioscreen especially attracting many thousands of souls to the idyllic Copacabana beach setting.

Apparently there would have been many more massive screens around cities but there was a fear of them being destroyed in the ongoing protests against the cost of the event. I say fear, but in fact is a reality as going by actions already witnessed here, any screen put up for the tournament wouldn't last a single night. 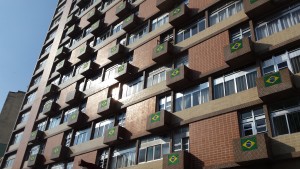 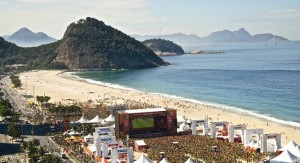 Here's something that hasn't been publicised outside of Brazil as far as I know - in order to take the World Cup to places in the country that have no electricity, the lager company Brahma have transported a vast number of huge mobile television screens to the remotest areas of Brazil.

As much as it is a massive publicity stunt, it also means many people who had no chance of watching the tournament previously are now able to cheer on their team. Nice one Brahma.