0 Our man in Brazil -The Aftermath

Brazil is still suffering a hangover. Although everyone knew it would be difficult, no-one predicted the humiliation of the other night. People tried to carry on with street parties and dancing after the match but it was impossible to brush over such a dark day in their football history.

On a drive through Sao Paulo after midnight last night anger and disbelief was clear to see. People slumped on kerbs with their heads in hands, drunken men in yellow and green being propped up by mates as they tried to find home and all in front of the eerie backdrop of flashing red and blue police lights.

On match day of previous Brazil games the mood was lig 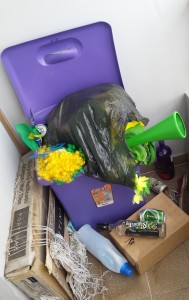 ht, happy and jovial. Drivers would wave other motorists out of a junction with a smile, fireworks would be popping above the streets and loud samba music was everywhere. Brazil and Neymar were coming and they were going to win.

Prior to the Germany game, the atmosphere was heavy. There was a tense feel in the air before the match and it would be true to say it was actually strange. A splattering of fireworks occasionally perhaps but nothing like previous games.

Losing Thiago Silva and their talisman Neymar was too much of a distraction at a crucial time. The magic was broken. In press conferences before the match, Felipe Scolari's dark bags under his eyes and short temper towards reporters betrayed a man under the stress of knowing that stopping the German team's organisation and skill would perhaps take more than he could muster.

Still, the show must go on and the football to come promises to be cracking. Argentina v Germany is a mouth-watering clash and, certainly, the former will need to be on top form to take the victory from the impressive Germans at the Maracana on Sunday.

Although I haven't been able to speak to any groundstaff at the stadiums during the World Cup, I will be bringing a report from one of the northern venues after the tournament has ended.