by Steve Mitchell
in Machinery & Mechanics
on 12 Apr 2017

0 Out There chooses John Deere out-fronts 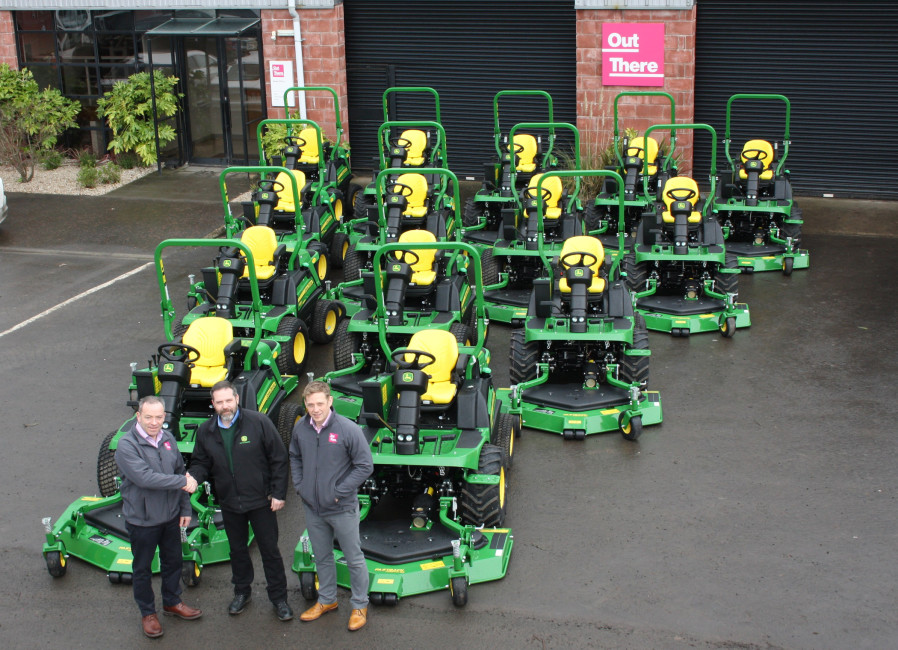 Out There Services, located in Co Antrim in Northern Ireland, has invested in a new fleet of 15 John Deere commercial out-front rotary mowers. The 1580 TerrainCut models, all equipped with 62in cutting decks, were delivered this spring by Lisburn based dealer Johnston Gilpin & Co.

In addition to organisations such as PSNI (Police Service of Northern Ireland), Northern Ireland Water and NI Housing Executive, DARD (Northern Ireland's Department of Agriculture) and CAFRE (College of Agriculture, Food and Rural Enterprise), Out There has recently signed two new grounds maintenance contracts, one with Viridian Housing Association in central London and another with Perthshire Housing Association in Scotland, as part of its policy of expansion and diversification.

The new machines replace a previous fleet of 15 John Deere 1565 front rotary mowers that were acquired on a John Deere Financial four-year contract hire package. By contrast, the current models have been bought using a hire-purchase facility provided at a very competitive rate by the company's bank, Danske Bank in Belfast, which has been applied across the whole business, says Out There's financial director Bronagh Vallely.

"Once we reached the end of the original four-year contract hire period and needed to replace the mowers, we decided we didn't want to be tied to the same type of deal," she explains. "Some machines will do more work than others, and some will still be capable of doing a year or two more depending on the hours, so we wanted the flexibility to look at each machine individually and decide what was best for the business.

"We didn't find contract hire was a particularly good solution for us. In our business, working in a variety of public open spaces, we deal with some very rough grass conditions compared to golf clubs, for example, so we have to be able to allow for that when buying and trading in our equipment.

"We've actually returned to using HP," adds Bronagh Vallely. "We can still take advantage of the capital allowances from a tax perspective and we own the machines at the end of the finance period, so we have the flexibility to decide whether to retain or replace them at that point.

"With HP we know the interest charges, so everything is budgeted for in advance over the four-year finance period. For this new purchase we also separately agreed and fixed prices with Johnston Gilpin for parts and servicing, which makes it easier for us to budget for the total fleet maintenance costs.

"The grass growing season just gets longer every year and we often start cutting in January, so reliable dealer back-up and servicing is so important. We know Johnston Gilpin's sales manager Ricky Neill can deliver what we need whenever we need it, to help keep our machinery fleet working to its full capacity throughout the year."