by Charmian Robinson
in Industry News
on 27 Feb 2010 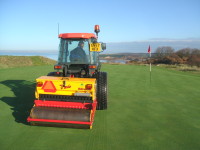 One principle that is generally accepted is that overseeding is necessary to achieve fine playing surfaces and that the absolute key to successful overseeding is soil/seed contact.

Stewart Duff, Course Manager of Gullane Golf Club, East Lothian, is very keen on overseeding and has hired a Vredo Disc Seeder for a few years now to overseed some fairways on all of the three courses at Gullane.

"This seeder managed to get the seed down to the right depth to make it come in contact with the soil, then it rolled the open slit lines tightly together again to protect the seed and minimised the surface disruption," he said. "The weather will play a significant role for germination take place this is why we overseed in late August because the soil temperatures and soil moisture levels are usually ideal for germinating seed."

More recently, Stewart has purchased a Vredo Supa Compact Seeder specifically to treat the greens. It was supplied by Campey Turf Care Systems through its Scottish distributor, Double A Trading Company Limited.

"I was very interested to be told that Vredo had produced another model which incorporated more discs set closer together, so it is particularly suitable for fine turf," he explained.

"Finding a smaller version which has the same qualities as the larger models, achieving the same high rates of germination but with closer disc spacings has given us even more benefits. In the past we have used the wider model of the Vredo Compact Seeder and we have always got a good strike with a clean finish and have had no issues with discs needing to be replaced after a days use, as with some other disc seeders."

"After a demonstration on a couple of our own greens we could see the latest Vredo gave a clean finish with the seed getting down to the right depth but with the added bonus of the closer set discs which helped to get more seed into the surface in one pass. It also means we can save precious time by going over the greens once instead of twice a year. This translates into significantly less disruption to play, coupled with fewer man hours required to do the job."

The greenkeeping staff overseed 57 greens using approximately 25-30 bags of straight fescue seed annually across their three courses. Adrian Gardner, Sales Manager for Professional Turf Equipment for Double A, is delighted that the machine has been well received: "The unique action of the Vredo overseeding system delivers an exceptionally high (90-95%) seed germination rate. The Supa Compact version has a double line of closely spaced discs only 3.5cm apart, which make a precise cut into the turf where the seed is sown directly in contact with the soil. This way the structure of the turf is undisturbed allowing the surface to be brought back into play immediately."

He added: "The Vredo Supa Compact Seeder is also of excellent build quality and finish and will greatly assist Gullane's greenkeepers in maintaining the greens and other closely mown areas to the high standards expected by members and visitors alike. Stewart can also be confident that Campeys, through Double A, provide a full back-up support and spare parts replacement service." Details of all Campeys products and services can be found on the website at www.campeyturfcare.com

Photo caption: Stewart Duff with the Vredo Supa Compact Seeder on the new 8th hole on Gullane's No.1. Course.