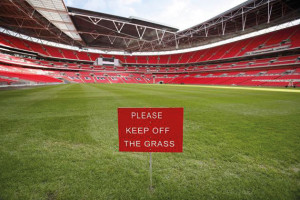 Our anonymous groundsman, Mr AKA Grasscutter, believes there have been some strange decisions taken by football's hierarchy.

Sorry to come over a bit Terry Wogan but, is it me, or has football gone a bit mad recently?

Firstly, the Football League narrowly avoided allowing 3G pitches following a split vote by the club chairmen. Then the powers that be at Wembley decided it would be a good idea to play two NFL games on the pitch, just days before an England Euro 2016 qualifying match - in late autumn and with obvious consequences; I thought that Dave Saltman's explanation on Talk Sport was very balanced, by the way. Finally, FIFA's independent ethics adjudicator - an oxymoron if there ever was one - found no evidence of corruption in the awarding of the 2022 World Cup to Qatar. Now, there's a surprise!

So, where to start with my bi-monthly observations (aka rant)? I guess, right at home.

I've no idea how my chairman voted; I didn't ask and he didn't tell me, but I do know he is pretty supportive of the work we do here, so I hope it was a 'no'. Had the vote been an acceptance, I guess there would have been no rush to rip up what are, in the main, pretty good natural turf surfaces across the lower leagues to install 3G. Yes, there are budgetary issues each year, but we have always, just about, got by with our end of season renovations. Either way, I doubt that my club could have afforded the installation costs, although I understand that grants would have been made available, and I wonder where they would have come from - the suppliers/installers perhaps?

Don't get me wrong, 3G has its place, but it is not in my stadium, as far as I am concerned. I know our first team players prefer training on natural turf, which says it all for me.

The Wembley pitch is a complex issue and will always struggle with what is right for the grass over what is right for income generation. Perhaps a bit more common sense is required when arranging these NFL fixtures. I suppose the alternative is to allow the England team to 'play away' at somewhere like the Etihad or Emirates, but that, of course, affects the income stream. A conundrum, indeed.

And now for FIFA ... football already runs rough shod over most other sports and FIFA epitomise, in my view, everything that is wrong with football. Talks of corruption and backhanders abound, yet nothing seems to change. I was gobsmacked when Qatar were awarded the World Cup because they are hardly a great football nation, are they? And a population of just over two million, which is roughly the same as Macedonia, Slovenia and Latvia, does not even offer football any spectacular growth potential either.

The World Cup has always been played in late June and through July, when temperature in Qatar reach a staggering 45OC (113OF in old money), and FIFA will have known this - everybody else did! So it was always going to be impossible to stage the tournament at its traditional time and, so, talk of a winter tournament abound, with even UEFA's Michel Platini stating that; "it will be staged in winter", although that has since been revised to May. Even then temperature will be mid to high thirties Celsius! Either way, it will run rough shod over all the European national leagues.

And, with still eight years to go before the tournament, how long will it be before FIFA decide that it is too difficult to grow and maintain grass in such high temperatures and suggest that 3G will be used? After all it is being used in the Women's World Cup in Canada in 2015 with FIFA's blessing, if not the players.

Keep the faith, and keep cutting the grass. After all, that's all we do, hopefully!