0 Paddy planning for a perfect pitch 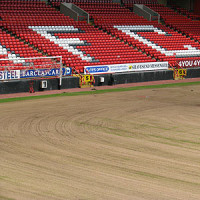 While most of Charlton's first-team squad and management are taking a break from the rigours of professional football in sunnier climes, Addicks groundsman Colin 'Paddy' Powell is working hard to make sure the Valley pitch is in top-notch condition for the start of the new season.

Head groundsman at The Valley for the last 18 years, former Addicks winger Powell and his team are currently immersed in making sure the SE7 venue is ready for a planned home friendly on August 2nd - a week before the new Championship season starts.

The current Valley pitch couldn't look more different to the surface in Charlton's final game of the season against Coventry City.

Instead of the lush green grass that regular visitors to the Valley have been used to seeing over the course of the season, the surface now looks more like a cattle field, with a multitude of tasks being carried out to make sure the turf is ready for the rigours of another 20-plus games being played on it.

Powell, who made 358 appearances for Charlton, said: "Ideally we like to turn the pitch over as soon as the season finishes, but we had 40-odd corporate games on it in May so we didn't really have time to do that this year.

"Instead we've just taken the top off, scratched it about, scarified it, top-dressed it and seeded it and now we're just waiting for the grass to come up.

"Once that happens we'll initially start cutting it with a couple of rotary mowers and then we'll cut it to its proper length. It should be good for the new season."

The unseasonal weather of late has also caused Powell a few headaches as he admitted: "The rain has been a problem. You always want a bit of rain when you've seeded but there has been too much really. There are puddles in places on the pitch but the weather is set to be fine now so we should be OK."

Despite more games being played in the Championship than the Premier League, the efforts of Powell and his team meant the Valley pitch was still in superb condition right at the end of the season.

"It did really well," said Powell. "These fibresand pitches tend to start off a bit weak but then they get better as the season goes on and the last four or five games it was in really good nick.

"Alan Pardew has an input into how he wants the pitch and he told me it pitch was ok last season, which I think is his way of saying it was good!

"There's more games in the Championship which affects the pitch a bit but not too much. You just need to be a bit lucky with the weather, you want it to be nice and sunny for home games and not too wet but it doesn't always happen like that."

The focus may be on the hallowed Valley turf, but even more work takes place at the training ground during the summer months with no fewer than nine pitches tendered to by groundsman Paul Geary and his team at the club's Sparrows Lane complex.

Supporters can see how the Valley pitch bares out over the campaign for themselves by purchasing a 2008/09 season ticket.

And existing season-ticket holders are reminded that the deadline for securing their usual seat ends on Friday.

And everyone who purchases a season ticket prior to August 1st will gain the same seat in the Premier League in 2009/10 free of charge should the Addicks gain promotion, thanks to the club's pioneering season-ticket offer.