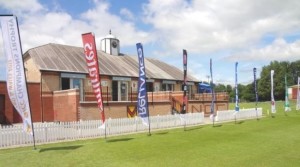 Robert Croft's side will welcome the tourists, who will be warming up for a triangular series with England Lions and their Sri Lankan counterparts, to Wales on Friday, July 15.

It means that Newport will celebrate 25 years at Spytty in style, much to the delight of club coach Mike Knight.

"It's fantastic news - when our ground at Rodney Parade was sold we felt it was the death knell of first-class cricket in Newport," he said.

"We never thought it would return but a group of people have worked so hard to develop Spytty Park and this game, which will hopefully attract a big crowd and be a great occasion, is the reward for that.

"We have established ourselves as a top ground in the Premier League and in 2013 Sri Lanka trained here for the ICC Champions trophy. This is another step.

"A cricket museum is being opened at the ground in the summer and it was all based on Rodney Parade but now we will have a new first-class chapter."

Glamorgan have a long history of playing cricket in the city, playing regularly in Newport following their merger with Monmouthshire in 1935 with Rodney Parade staging fixtures in the County Championship until 1965.

Owned by Lord Tredegar and boasting an impressive pavilion, the ground hosted 27 Championship and four List A matches as well as being regularly used by junior sides from the Gwent area.

For the full article, visit www.southwalesargus.co.uk.