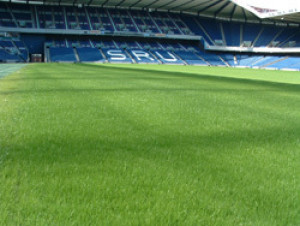 The Scottish Rugby Union (SRU) has revealed that the Murrayfield pitch has been beset by parasites in the run up to this year's autumn internationals and that garlic is being used to combat the problem.

Scotland's Viagogo Autumn Tests begin against Japan this Saturday 9 November and the spraying of garlic is proving to be an unusual remedy for the damage caused to the grass root structure by nematodes.

The Murrayfield pitch has been used for Edinburgh games in the Heineken Cup and RaboDirect PRO12 and the recovery operation has been underway for around a month but director of management services, Mark Laidlaw, says there could still be a number of problems caused at scrum-time.

"A soil examination in September revealed an excessive build up of nematodes which have caused significant root damage," he said.

"The result is a shallow and weakened root network and, though it continues to perform well in play, it can weaken under the significant pressure exerted by scrums."

Laidlaw insists that the Murrayfield ground staff are putting in a huge amount of time and effort in an effort to resolve the problem but says there is no quick-fix solution and the pitch will continue to be treated over the coming months.

"We've worked with some of the leading experts in this area to examine and treat one of the best surfaces in world rugby using natural remedies, including the spraying of garlic, but it takes a number of weeks to eradicate the problem and then to recover root strength," he said.

"The ground staff will continue their efforts to develop and consolidate the root structure, and hope to return the pitch to the standard we all expect to see at the national stadium."