Part 2 of our look at the twin international stadiums in Hamilton, New Zealand. This installment takes us into the beautiful Seddon Park, a true classic test

match stadium with a great picnic carnival atmosphere for its spectators. It's also the second largest proper cricket ground in New Zealand. Head Groundsman Karl Johnson tell us a little about life at the park.


Seddon Park is a well loved cricket venue in New Zealand. It has hosted many popular test, one day and 20/20 internationals as well as domestic cricket tournaments. Pitchcare swung by on a winter's afternoon in scenic Hamilton for a chat and a cuppa with the head curator Karl Johnson who manages the venue with his right hand man Nathan Bunting.

The venue is intimate with a capacity of 12,000, ensuring spectators feel they're in the thick of the action that's taking place on the pitch. This village green ambience makes for a party atmosphere on the big occasions which explains why the venue is one of the most popular in New Zealand. 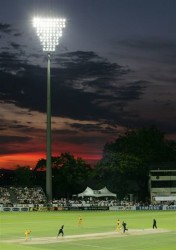 The ground has gone through various name changes over the course of its history, previously known as "Wespac Park" and other similar sounding names. But in 2006 it reverted back to its original name of Seddon Park, named after Richard John Seddon, the former New Zealand PM. Seddon Park is now synonymous around the world with quality New Zealand cricket in a great location.

The ground used to hold three wicket tables, but now houses just one. Karl explained the background behind this. Club cricket used to be played on the pitch, enabling two games to be played at once.

Today the ground houses just the one centre block of nine pitches, made up of Waikari Clay which is used at various venues such as the NZ Cricket's High Performance Centre and AAMI Stadium in Christchurch. The clay is brought up from Christchurch and Seddon Park has used it for five years. Karl is a fan. It's a swelling clay and allows for the growth of good quality turf. It tends to take a little longer to prepare a wicket than non swelling clay, but the result is always of a high quality and worth the extra blood sweat and tears.

The turf on the centre wicket is a Rye PGG901. Karl also has some couch (Agridark) on the practice wicket which they are trialing. With the cooler climate in New Zealand (it can rain non-stop for days at a time)it's a case of trial and error with the couches, to see if they hold up under the conditions. Karl remarks so far so good.

During 2005 a sand slit sand carpet drainage system was installed into the outfield. The drainage system is made up of lateral drains spaced 10m apart, running approx north to south, and 13km of sand slits spaced 1m apart running at a 45 degree angle over the laterals. Then 40mm of sand was applied to the top surface in 8mm layers. The drainage on the outfield is now excellent. A brand new practice area has been built outside the venue to add to the park's international facilities.

As mentioned in part 1 Karl's stint at New Zealand Cricket, managing three ovals, ensured he was well prepared for his current role. Karl is a big cricket fan, he describes the huge satisfaction of being able to prepare a wicket for a match that can in turn influence the result, sometimes controversially for one or both the teams, and perhaps get the press into a frenzy too!

Over the summer season the work load is pretty intense, with seven-day weeks required. Before an international match it will take Karl and his team ten to twelve days with all hands on deck to prepare a wicket for play. This will more than likely see the guys working Christmas and New Year's day but that's all part of the job and the working days are flexible, which is the flip side to working those unsociable hours!

Karl explains there are KPIs (key performance indicators) that he and his staff are obligated to meet for every match - these include monitoring moisture levels, bulk density and pore saturation. There is a minimum speed that the outfield has to reach. disease, weeds and Poa levels are all strictly monitored as part of the team's targets. Karl saves data from every game, so the information's always on hand as and when it's required.

There is no set routine for preparing a wicket; soil testing for moisture content will invariably be involved. The increasingly scientific involvement in cricket wicket preparation is an area Karl and his team take in their stride.

The table is mowed at a height of 12mm and the wicket sits at around 6 or 7 mm.
As at Seddon Park's sister venue Waikato Stadium, the groundstaff use their own judgment with no set fertiliser program. They put around 250 kilos of nitrogen onto the ground every year. Major renovations are done in the autumn. Wicket blocks are completely renovated and coring and scarifying on the outfields are also done, stock standard renovation jobs for cricket pitches.

A "big daddy" seven tonne "FBR" ( $&@*?# Big Roller ) as Karl aptly puts it, is used at the ground. The next roller down is a more modest four tonne machine, with the Mentay walk behind the baby of the group. A greens roller is used for one day matches, to iron the pitch out and gi 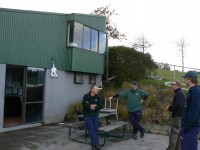 Musing on the high profile aspect of his job, Karl reflects it can sometimes come with unwelcome media attention in the lead up to an international match or 20/20 game. It's not been unknown to have over eighty messages waiting for him on his phone, all from media during a big match. But Karl's philosophical about this intrusion and his team decline to talk to the media about in-house situations.

Karl believes this pressure has made him a better Turf Manager and spurs him and his staff to achieve that pinnacle that is the perfect pitch, if there is such a thing, as what makes a perfect cricket wicket is a subjective and contentious topic.

Looking at future projects and plans, as well as trialing the couch in different areas around the grounds, new facility upgrades are in the pipeline. Karl is looking forward to 2015 and the Cricket World Cup which New Zealand is hosting; plans are already afoot for this major event in the world sporting calendar.

Offering some wise advice for any budding young curators out there looking for a future career in cricket wickets, Karl stresses a love of the game of cricket is a must, if the passion's not there there's not much point pursing the goal! Karl and his staff are there for every game, on hand to pull covers. Karl mentions the opportunity to work with some of the world's top sports people and travel, are both attractive bonuses of his job. Karl's had a couple of jaunts across to India and with other opportunities on the horizon there's always lots to look forward to. 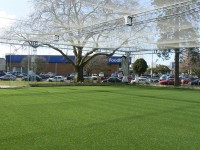 From his trip to the subcontinent karl remarks on the differences between cricket wicket prep in New Zealand and India. The difference in dryness of the ground between the two countries was striking, with the ground in India doused with water for a measly half an hour leading up to a game, talk about playing in a dust bowl. A strip at Seddon Park is watered for four days in preparation for a match.

Pitchcare Oceania thanks Karl and his team for the tour around Waikato Stadium and Seddon Park. It's obvious from the get-go why these two stadiums are some of the best loved in New Zealand. Karl runs a tight ship and his team demand perfection and it shows as both stadiums are immaculately presented year round. The results that the team achieve are always the highest possible, be it international cricket, rugby or regional sports.

It's been said before that a city's stadium is its Colosseum, its centre piece. It's what the rest of the world will judge you on, shown on television sets around the world, they are often more famous than the cities themselves. The people of Hamilton can be proud and rest easy that these two world class venues are in the best of hand.