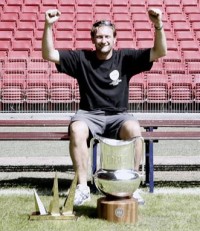 Dec 8th 2005 saw the final game of the year in Parken, a Royal League (www.royalleague.com) match against local rivals Brondby.