The Parken Stadium is the home of FC Copenhagen - F.C. København in Danish or FCK for short! The stadium also hosts the Danish national side as well as numerous concerts and events. Fresh from a month long tour of the UK with Campey Turfcare's Simon Gumbrill, taking in BTME Harrogate on the way, Assistant Groundsman Daniel Madsen talks about life at the stadium.

Hi, my name is Daniel Madsen and I am Danish. I am 21 years young but, after visiting Harrogate this year, and spending a month with Simon Gumbrill of Campey Turfcare, I feel much older!

Chris Hague, my boss at the Parken Stadium, had arranged for me to come over to the UK to see the golf show and then, with Simon, visit a lot of the Football and Premier League grounds, and their groundsmen of course.

It was an eye opening opportunity for me, seeing the sort of machinery that each ground had and also the quality of the pitches in England. I was lucky enough to be invited to some of the games and the atmosphere at English grounds is something really special. All the guys I met were very knowledgeable and gave me lots of encouragement. I thought that the Danes had a reputation for drinking, but I now know the Brits are far more capable!

I have known Chris for a number of years and began working for him on a 'casual' basis at the age of 15. Chris must have been impressed with my skills as he offered me the opportunity to join the grounds team at Parken and begin my career when I was 18.

My role and duties, according to Chris, include everything and anything; basically we have to maintain all surfaces to the highest standard possible at both Parken and the KB (Kjøbenhavns Boldklub) training ground. 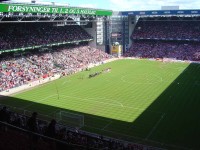 In my brief career so far I have developed a number of skills, from using pedestrian and ride on cutting machinery, tractor mounted and pedestrian aerators, operation of lighting rigs, match day preparations, verti-cutting, sweeping, seeding and brushing, the application of topdressings and fertilisers and irrigation. I have also been involved in the pitch renovations, including using the Koro to strip the surface.

At the moment we have a 'multi-use' pitch in the stadium and two pitches at KB, with a third under construction. Chris and myself have to look after all of this, although we are currently recruiting a new team member.

As a groundsman all I've known is Parken and the training ground and, since my appointment I believe that I have brought with me enthusiasm, commitment to hard work and a willingness to learn.

I've asked Chris about his history, but he won't tell me! I also asked him to offer his opinion (for this article) on this question and he mentioned Jack Shit. Does he work in England?

I am currently studying at Jutland College in Denmark, learning the basics of groundsmanship and greenkeeping. Summer 2008 was the first time this course was recognised as an education. In the future I would like to further my education with some distance learning. Part of the training policy at college is to learn machine operation and maintenance but, as I have been using machines in Parken since I was 17, I feel that I am a competent operator already.

However, training at work is ongoing and I feel I learn new skills regularly. We have a wide range of equipment that is used between Parken and KB and, on occasions, we hire in equipment for renovations.

Match day preparations are normally carried out the day before any match, although FCK generally train at the stadium the day prior to a match, in which case we would set up the day before that. 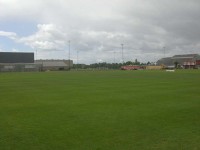 Working at the national stadium we are required to produce high standards for the players. This is a constant challenge in Parken due to the event schedule, but progress has been made at the training ground, and our intention is to raise the standards there as well.

Personally, I would hope to be in charge of my own venue one day. It's strange, but Chris tells me I should be aiming for his job!

I would also like to experience more of the world and develop my knowledge.

The fertiliser programmes are event dependant in Parken, where we use a mix of liquid and granular feeds and tonics. At KB we use slow release fertilisers three to four times through the season.

In the autumn we have a topdressing programme, putting on 25 tonnes per pitch at KB per year. We also hollow core 2-3 times a year. At present we get one week for renovations at KB, Chris tells me that is more than enough, but I think we need longer!

I'm not sure if we have any wildlife policies in place, although Chris says that we have AC/DC playing this year, so I will let you know after that! I do know that pesticides are banned in Denmark and there are major restrictions on the use of fungicides.

Parken have adopted a new strategy to replace the pitch, event depending. This means we can basically use the pitch area for a variety of events throughout the year. This policy is, basically, re-turf whenever necessary to ensure a good surface for grass sports.

The football season breaks for winter in Denmark, from the second week in December to early March, sometimes earlier depending on UEFA matches.
This winter we closed down the stadium and removed the Grassmaster fibres from the pitch, this work was carried out by Support in Sport. The theory is that a clean rootzone will enable us to root the new turf better to anchor the playing surface. Here is a brief description of the workload that we have in the main stadium.

We had a Lego (Danish product did you know) exhibition on the pitch (on the new rootzone actually) and the plan then went as follows:
Monday 16th February, Lego moved out of the stadium and we got the pitch back at 1400hrs.

We dressed the pitch with granular seaweed and humates; all our materials are supplied by Richard from Gem Professional (I must give Rich a mention as he looked after me whilst in the UK, along with Simon from Campeys). 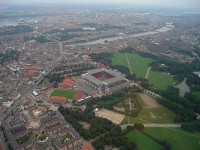 The surface was rotovated and then laser levelled. The turf installation began at 1600hrs and was completed by 0600hrs on Tuesday.

On the Tuesday we rolled the pitch with a roller bought from Simon Gumbrill the previous week. Simon is a Man City fan and we were set to play them in the UEFA cup on the Thursday, so he was willing to help us!

The first training session took place at 1600hrs Tuesday. On the Wednesday we rolled and cut the new turf, set in our white lines before FCK trained at 1600hrs and Man City at 1900hrs.

On the Thursday morning we repaired the pitch from the training sessions, cut and marked out ready for the evening's game. The score was 2-2.

On the Friday, we again repaired the pitch, mowed it and applied a liquid feed of 14:4:4 + liquid iron + seaweed. On Saturday FCK trained on the pitch at 1000hrs before playing Helsingborg at 1300hrs.

On the Sunday we again repaired the pitch before applying some granular 11:5:5 and then watered it in.

The next home game was on March 15th, with quite a few training sessions in between. We have the MLRt grow lights and they have been doing their work well. Despite the cold weather we have been cutting daily at 25mm and removing up to 6-8mm daily from the new turf.

And finally you ask, "How much do you love the industry?" I think the hours that we work, with the commitment we show, demonstrates our passion for the industry - love is a word I only use when I am drunk!