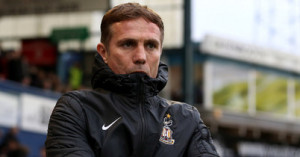 Phil Parkinson bemoaned the Valley Parade pitch after his Bradford side were brought back to reality with a 1-1 draw with Colchester.

The Bantams needed Filipe Morais' late goal to salvage a 1-1 draw against Colchester after Chris Porter had given the U's a fourth-minute lead.

Parkinson's men enjoyed themselves on a slick surface at Stamford Bridge but struggled to get going seven days later and the Bradford boss laid the blame firmly at the door of the boardroom.

"I've told the board the pitch is terrible. I asked them to help the groundsman, give him some funds to improve the pitch, otherwise we're going to be in trouble," he said.

"I think at the time they thought I was making excuses because we'd had a bad run at home, but I don't make excuses.

"Nothing was done and I've got to defend the groundsman because he's working so hard and hasn't got the help needed from upstairs to make the pitch better.

"I got in at 12:30pm and the ref was going to call the game off. I convinced him it'd been worse in previous games and we should play it.

"If (Colchester boss) Tony Humes had been there then I don't think the match would have been on because when he came in at 1:30pm he was very unhappy with the pitch.

"It's not an excuse but it's unfair. I asked the board for help but the groundsman has been hung out to dry."

Parkinson admitted the media attention in the aftermath of his side's stunning win over the Premier League leaders had been a distraction in the build up to the meeting with his former club.

Bradford were lucky to still be in the game after Gavin Massey and Sammie Szmodics spurned golden opportunities for the U's in the minutes following Porter's opener.

"People might say, 'We could see that first 20 minutes happening.' But we tried everything to steer away from that," Parkinson added.

"It took us until half time to sit down with the lads and put things right. We dominated the second half but just couldn't find that winner."

The result meant Bradford avoided a third straight league defeat but did little to boost their play-off chances.