by Simon Kars, Pitchcare Oceania
in Industry News
on 21 Aug 2009

The Parramatta Eels are not having the best start to the 2009 rugby league season, with some critics putting question marks over players at the club. Yet, year after year, one aspect of the club which is never in question is the high quality playing surfaces prepared by head groundsman, Dave Hinkley.

Parramatta Stadium was built with a seating capacity of 20,000 on the Cumberland Oval site in 1986 to support rugby league, rugby union and football, along with other sporting, cultural and entertainment events, in the greater west of Sydney. In 1993 the playing surface was reconstructed with a first class sand-based, mesh reinforced StrathAyr System profile, which has been very successful since installation.

All the stadium's maintenance, along with a floodlit training ground, is also undertaken by Dave and his staff of three, keeping the boys busy at all times. Big names in the world of entertainment, such as Paul McCartney and Michael Jackson, have performed at the venue, whilst popular events, such as the Australasian Motorbike Supercross Championships, have also been held at the stadium.

Dave has been employed as a groundsman by Parramatta Stadium for the past twenty years and his role grew as the years went on, until he reached his current title position of Head Groundsman.

Communication between all the employees and directors at Parramatta Stadium is excellent with everyone's opinion being considered on most matters, including the playing surface. "I've got to cover every aspect and, as unintelligent as some peoples' input and answers may be, it's that one in a hundred piece of input or answer which may save you," Dave says.

The network between groundsmen in New South Wales is very healthy, with advice and help offered to anyone who needs it, which is evident by the positive relationship between Dave and Graeme Logan of ANZ stadium. One of Dave's key management practices is to not over complicate things when an issue arises, he says. "Too much technology into something basic turns it into a complicated exercise, sometimes you just have to sit back and just get back to basics before implementing other options." 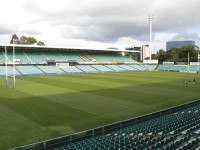 The 140m x 80m arena playing surface icomprises couch 'Legend' grass, which is then oversown with ryegrass 'Reliant' in the cool season, resulting in a high quality surface all year round. The profile is a StrathAyr system which comprises mesh reinforced sand with 10% Canadian peat moss, clean washed river sand and 7mm pea gravel. The drainage of the profile is first-class and will get rid of 300mm in an hour.

The 80m x 60m floodlit training ground, adjacent to the stadium, has Kikuyu turf. The proximity of the training ground enables Dave to maintain the high quality arena surface by implementing a management strategy to allow the load of training to be shared across both surfaces, particularly important before a major event or match day.

Two machines that Dave rates "highly important" to his maintenance regime are the Toro Reelmaster 3100D mower and the Soil Reliever SR72. "I like the fact that the engine is at the rear and the operator sits at the front" he says. "It feels more comfortable, and vision is excellent. The design also creates easy engine access making service and repair work much more efficient." 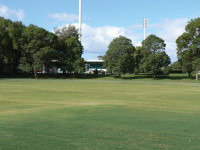 Cutting heights are based on the time of year and which sport is to be played. During the cooler autumn/winter period, when rugby is the main sport, the ryegrass is maintained at 35mm. When the warmer spring/summer period commences, the cutting height is dropped by 5mm increments over several weeks until the desired cutting height of 13-15mm is reached. For football matches 20mm is the norm, but this can vary depending on the requests of the home team. "We always ask what their surface preferences are, then offset that against what we are trying to achieve" says Dave, "and if that means we have to strike up an agreement or go their way, so be it."

A Soil Reliever SR72 was originally borrowed from the ANZ Stadium, but Dave has recently purchased his own. "One of my main concerns is the amount of thatch within the profile which can hinder drainage and filtration. The SR72 will overcome these issues. The machine is used once a month, usually with hollow tines whilst overseeding with ryegrass. Solid tines are used to prevent damage to juvenile leaf whilst eliminating wastage of seed and any additives in the profile." 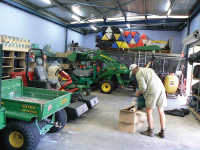 Both the arena and training ground surfaces are watered with mains water and rain water. The latter is collected off one of the grandstand roofs into several tanks, which can hold up to 300,000 litres. This harvesting has led to greater efficiency.

The irrigation control system used on the playing surfaces at both the stadium and the training ground is an old and simple Hardie system with a digital key pad. "I've thought about updating it, but everyone knows how to work this one" says Dave, "and it's still operating well, so there's no real need at the moment."

The system controls fourteen stations of four hydraulic drive Toro 640 sprinklers, which spread over both the training and stadium surfaces. They have a rubber cap to protect both the sprinkler and the player and, so far, there has not been an issue where a sprinkler has interfered with match play. "The Toro 640s are proven" says Dave. "They have been here as long as I have, and there has been no real major issue with them." 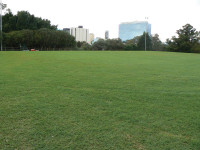 There is no set schedule when it comes to the fertilising programme. It is indexed to events, weather and bi-monthly soil tests. Both liquid and granular fertilisers are applied, with a tendency to use more liquid fertiliser during the cooler months due to its quicker uptake by the turf.

Dave takes a more biological approach with the use of organic based fertilisers and biological inoculants. "We use chemicals when we have to, but we've had success with biological products." he states.

Diseases which are preventively sprayed for are Pythium and Rhizoctonia, with the root-borne diseases posing a greater threat, with Dave adding, "Once you lose your roots, they don't just recover, you have to wait for the new growth". Several years ago nematodes became a problem, but at the moment the nematode count is at a manageable level and not creating any issues due, in the main, to the use of biological stimulants.

Some of the challenges faced by the groundstaff are the preparation and dismantling of major events setups. When events are proposed and planned well ahead of the scheduled event date, the groundstaff can be informed and organised creating a smooth transition, without it impacting too greatly on the arena playing surface. During these times working hours can be long and tiring, with some shifts exceeding 36 hours, especially when events are scheduled close together. 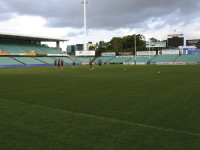 One event that created some challenges was the Australasian Motorbike Supercross Championships. Parramatta was eventually chosen after a period of uncertainty by the organisers. But it followed immediately after the last scheduled Rugby League World Cup match at the stadium.

Set-up commenced the very next day, making the transition from one big event to another quite intense. Geotextile fabric, along with plywood, was used to cover the arena surface before the building of the track commenced. The preparation process took approximately four days to complete with the event held on the fourth night and, by the following night, the whole event was dismantled and cleared completely from the stadium. "The Supercross guys were fantastic" says Dave, "and the only problem I had with the arena surface was a few wet areas which seemed to have boiled, damaging the turf. But it wasn't a major issue."

Dave obviously enjoys his work at the Parramatta Stadium. "The scenery, setting and peacefulness, along with the good people here, make this place pretty unique" he says. "I hold great pride in looking after the stadium and that's something I encourage in my staff. Have pride in what you're doing here."
"When I eventually move on, I'd like to leave behind a work culture of caring about what you do. Don't treat it as 'just work', make it personal and aim for the best results."