by Laurence Gale MSc
in Schools & Colleges, Rugby, and Cricket
on 03 Oct 2013

0 Part of the fabric of Malvern College

Martin Evans is almost part of the fabric of Malvern College. The personable Head Groundsman has worked at the 250 acre site for the past thirty-two years and has no intention of hanging up his boots just yet.

He took over the role in 2007 when Roy McClaren retired, and considers himself fortunate to have worked under both Roy and his predecessor.

"I was always interested in sport as a youngster and, when I left school, came to the College on a six month Youth Training Scheme. I must have impressed someone," he says, "as I was offered a full time position on the grounds team."

"In 2015, the College celebrates its 150th anniversary, and I am keen to ensure that the grounds look at their absolute best. Fortunately, I have a fantastic team here who all share my aims," says Martin proudly. "We have 200 acres of grounds at Malvern College to maintain and 50 acres at the prep school, The Downs Malvern. These are divided between sports facilities, formal lawns and gardens, paddocks and woodland area, so we are kept busy."

The grounds at The Downs Malvern are tended by Mike Mangan (4 years) and Tom Battersby (13 years).

"Whilst we all have specific tasks, we are a multi-skilled team and, when required, it can be all hands to the pump! For anything else, I'll employ specialist contractors. These include Complete Weed Control for spraying selective weed killers, Phil Day Sports for a number of pitch renovation projects, Exclusive Leisure Ltd and Hooley Landscapes for harder landscaping jobs, along with local specialist tree surgeons to manage the work on the hundreds of mature trees around the site."

Martin goes on to explain that most of the playing fields at the College have been constructed or laid down upon the local native soils, a predominantly heavy clay loam. "The depth of the profile is quite shallow before you hit bed rock," explains Martin. "Malvern stone can also be found in the top 200mm, and that often dictates to what depth we can aerate the pitches. Some can only be spiked to a depth of 100-150mm."

"This means that the main site is not ideally suited to verti-draining, so we are in the process of purchasing a Sisis Maxislit to aerate the cricket outfields and winter sports pitches," he continues.

Like most private schools and colleges, the playing surfaces are in constant use, not only by the pupils but also third party users. "Worcestershire County Cricket Club use the Sports Complex throughout the winter for pre-season training, and Worcester Warriors are currently based here for their pre-season training whilst their pitches are being renovated."

Martin is responsible for the grounds budgets at both sites and, over the years, has amassed a fine fleet of machinery. These include John Deere triples, Ransomes, various cylinder mowers, including Protea and Allett, Autorollers, Mountfield rotaries and spray jet line markers.

"The wickets are initially cut out at 7mm, and we follow a typical ten to fourteen day prep, reducing the height to 4mm, and rolling for thirty minutes a day with an Autoroller."

"We repair the wickets immediately after use so we can bring them back into play later in the season."

"Tom and I come in most weekends to prepare the cricket pitches. We usually start at 8.00am ready for an 11.00am match start, then remain on site, moving covers, carrying out the interval brushing, marking and rolling as required. It's usually around 4.00pm that we get to go home, leaving the pupils to put the covers back on once the game has finished."

"Feeding of the sports pitches is kept to a minimum," says Martin. "Being on a heavy clay loam, it tends to have sufficient nutrients and a good cation exchange capacity so, on the advice of Roy McLaren, we only put on an autumn/winter feed to promote root growth. A spring/summer feed would promote too much growth. It usually takes at least four days to complete a mowing cycle of the site as it is!"

During the rugby term, six rugby and three football pitches are marked out. Then, from January to late March football takes over, with six pitches being prepared but leaving one rugby pitch and one lacrosse training area. April to late June is predominantly cricket, but also athletics, rounders and tennis.

Rugby pitches are cut at between 25mm and 50mm, with the lines being cut out with Mountfield rotary mowers. Football pitches and athletics are cut at 25mm. All pitches are marked out with spray jet line markers on a weekly or per fixture basis.

All amenity lawn areas are cut twice a week using a John Deere triple mower set at 25mm, with all turf areas (pitches and lawns) sprayed once a year to control weeds, pests and diseases.

"I'm mindful that the College needs to look at its best all year round," states Martin, "so every effort is made to ensure the College is presented in the best light, and gardens and grounds are immaculately presented."

"Our end of season renovations are targeted at the heavily used sports surfaces, with particular attention paid to the cricket squares. These are heavily scarified, in three passes, with our Graden, solid tined with the Groundsman spiker and topdressed with Kaloam using a Sisis topdresser, applying seven or eight bags per strip."

"Since I have been here, the standard of cricket and the number of fixtures has increased enormously, so these renovations are, perhaps, our most important function - to ensure high quality wickets for the next season."

And, when asked how his job has changed in that time, he replied; "all the computers and paperwork. Yes, it's easier for communication, because people can just email me or call me on my mobile, whereas I can remember when it was messenger pigeon and, if it didn't arrive, then it was too late to do anything!"

"This time of year [June] I get in around 7.30am, check my emails, maybe have a quick conversation with our Master in Charge of Cricket, go and see the lads to give them a quick brief on the day's work, depending on the weather, and what fixtures we've got coming up. Then John, Tom and I go down to the cricket pitches, take the covers off if they've been on overnight, then either rake, brush, cut or roll depending on how far we are down with each track."

"Machinery wise, I would say we still have to manage our capital budget carefully, but the improvements are with the likes of the triple mowers; they are far quicker. We used to have an old Ransomes 180 and, what would once take us a whole day to cut, is now being completed much faster and with a better quality of finish."

"The Graden has been a terrific purchase too and, obviously, my new Maxislit is going to improve things for us!"

"We purchase machinery outright and, rather than deal with one manufacturer, we buy the machine we think is best for the job. That means that our servicing may be carried out by more than one dealer, but it works for us. Next on my shopping list is a new 36" Allett, which will help with pre-season rolling and net areas."

"We brush the artificial surfaces on a regular basis and remove any leaves from the area. We are planning to clean and redress the hockey pitch this August. This will be carried out by an outside contractor," Martin explains.

"And does he have any pet hates? "What I won't do, or allow my staff to do, is leave everything to the last minute. If I start work on a wicket ten days before the game, and I lose a few days to the weather, I can adjust, as I have already started work in advance. Whereas, if I go out there two days before and it tips it down with rain, what am I going to do? The coaches and players will still expect a good quality wicket."

"My staff are valued members of the Malvern College team. We offer them training, both on site and with outside agencies, so that they can keep within all current legislation. We are looking to employ an apprentice gardener in the near future to bring the gardening team up to three."

Martin finishes by saying that this is a great industry to work in, but its profile needs raising. "We could begin by filming a fly on the wall documentary, following groundsmen at a high profile venue around for twelve months, along with nationwide advertising of career opportunities within schools, and higher education establishments." 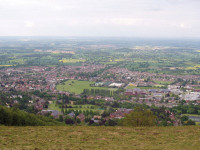 "What also impresses me about this industry are the volunteers who work with limited equipment and time. They are really undervalued. Let's not forget, they give up their free time so that we can play sport, I have every admiration for them and the work they do. Equally, I am always pleased to see professional groundsmen and greenkeepers offering advice to them via Pitchcare."

Meeting the staff was thoroughly enjoyable, and it is understandable that Martin has dedicated his working life to the College.

The ambience and setting of the grounds, with the Malvern Hills as a backdrop, is wonderful, and the effort the groundstaff put in ensures that the grounds always look their best.