by Editor
in Industry News and Football
on 23 Nov 2015 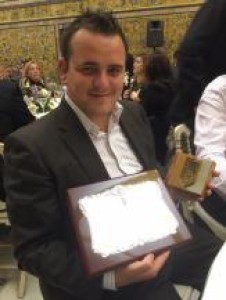 Commenting on his Twitter account the former Arsenal head groundsman said, "I'm very proud to win the Groundsman of the Year award here in Spain. A big thank you to my team; without them I'm nothing."

Paul joined Real Madrid in 2009 after a long spell with Arsenal, first at Highbury Stadium and then at the Emirates Stadium where he was part of planning group that designed the new stadium. He was a student at Myerscough College during which time he joined Blackpool Football Club as an apprentice before moving to Arsenal as an 18-year old, initially working under Steve Braddock.

In his thirteen year career at Arsenal, Paul won the Premier League Groundsman of the Year Award on three occasions. As well as his role with Real Madrid, Paul is a consultant to EUFA, advising on the pitches used for their tournaments.