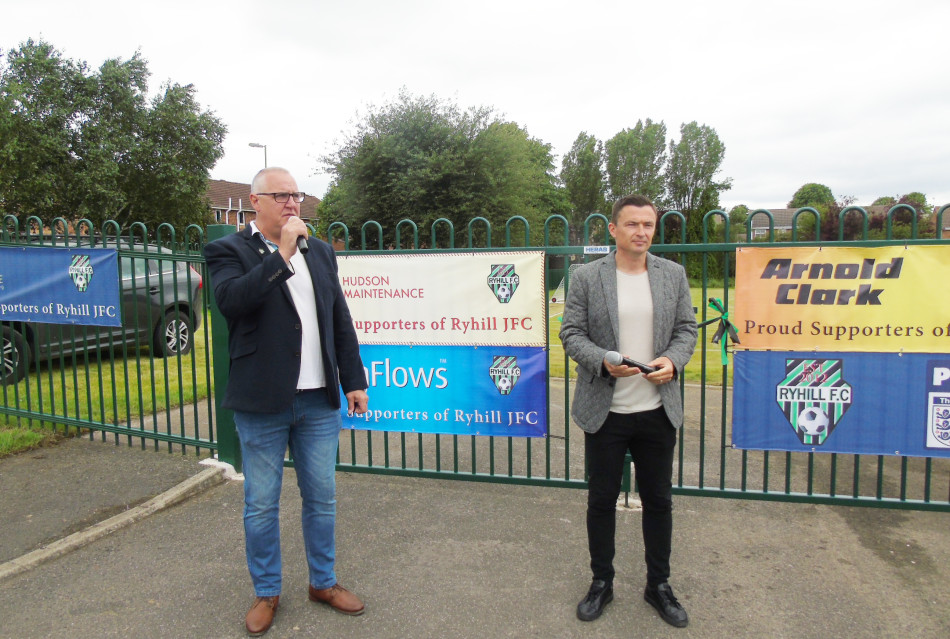 Gary Middleton, Head Coach at Ryhill FC (left) is joined by Paul Heckingbottom at the unveiling of the club's new grass pitches

The grass pitches and grounds maintenance equipment were made possible thanks to investment from the Premier League, The FA and Government's Football Foundation.

After netting a £29,682 grant from the Football Foundation, work begun on the site in November 2018. The grant supported the development of existing unused land at the site to create two additional 7v7 grass pitch, including new goalposts, boundary fencing and the purchase of new pitch maintenance equipment.

Ryhill FC's teams compete in the Charles Rice and Selby District Leagues and the club recognised the need for additional junior pitches to provide increased provision for training and match play.

Sheffield and Hallamshire County FA worked in close partnership with Ryhill Junior FC to focus on increasing participation through the growth of new teams and the introduction of the club's first female team. The aim is for the club to grow from 13 to 17 teams in the next five years and the introduction of two new girls' teams will support over 35 girls playing competitive football.

Rycroft Leisure Centre has its origins in 1927 when the Ryhill and Havercroft Miners Welfare Scheme was established to provide sports and recreation activities for the communities of Ryhill and Havercroft. With support from the two parish councils the centre provides a range of sports and social activities including: football, cricket, bowls, badminton, a fitness suite and vibrant youth centre.

Gary Middleton, Head Coach at Ryhill FC, said: "This is a great day for Ryhill Football Club and I would like to thank Paul Heckingbottom for officially opening our new pitches which will enable the club to offer more young people the chance to participate.

"It's been a real team effort from club volunteers and our supporters in the local community backed by the generous funding of the Football Foundation."