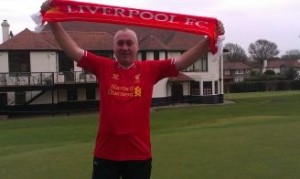 A greenkeeper Liverpool fan is putting football rivalry to one side for charity when he abseils 140 feet from the roof of Manchester United's Old Trafford ground!

Paul Pearse, Head Greenkeeper at Warrington Golf Club, was undergoing a routine check-up in April 2012 when doctors noticed a lump indicating testicular cancer, and which had begun to spread. He was operated on within days, and after nine weeks of chemotherapy and a further two months of recuperation he was given the all clear last year.

Now Paul, who says he doesn't like heights, is to plunge 140 feet from the 76,000 capacity stadium's roof in aid of The Christie, an organisation which raises funds for vital cancer research and treats more than 40,000 patients each year.

Paul said: "Without The Christie I wouldn't be here. I wanted to give something back so that other people suffering from cancer have a better chance to be as fortunate as I've been.

"I know some people would gladly chuck a Scouser off the top of Old Trafford but I'm doing this willingly, and hopefully the rope will be sturdy! I'm not a fan of heights and I'm not looking forward to that moment when I have to step off the stand at all, but it's all in terrific cause which is obviously very close to my heart.

"Basically I would urge every bloke to check themselves regularly. As it happened my lump was found when I was having a general check-up, but if you do find something unusual go straight to your doctor, catching it early is so important."

Paul's abseil will be on Sunday 23 March and you can find out more and sponsor him at http://www.justgiving.com/paul-pearse - all contributions will be very gratefully received!