Bruce Craig's plan is for Bath Rugby Club to have a new stadium befitting an Aviva Premiership side. Whether that is on the current site or 'out of town' is, as yet, unclear. As recently as the 2009-10 season, the ground capacity was increased to 11,700, so it would seem logical, to this outsider at least, to develop the Rec. Certainly, in financially difficult times, that route would have less impact on the club and, of equal importance, the shops, hotels, pubs and historic sites of this beautiful city, where travelling fans tend to 'make a weekend' of it. An out of town venue may seriously impact the city's income from its rugby club.

The city and the rugby club have been closely linked ever since 1894, when a lease was granted by Captain GW Forester to the Directors of The Bath and County Recreation Ground Company Limited. This lease allowed work to be carried out on the land which would make it "suitable for cricket matches, lawn tennis and archery tournaments, football matches and all other outdoor sports".

The first rugby match was played on the ground in that same year. Three years later, the ground hosted its maiden first-class cricket match, with Somerset County Cricket Club hosting the Gentlemen of Philadelphia as part of the Bath Cricket Festival. Somerset CCC still play one match a year at the Rec, although the weather put paid to this year's fixture.

Working alongside Bruce, himself a former England Students rugby player, is the club's Chief Executive Officer, Nick Blofeld, who was previously head of Epsom Racecourse. Between them, they have the drive and experience to achieve their goals. The first of these has almost been realised with the near completion of a brand new headquarters for the club at Farleigh House, which lies midway between Bath and Trowbridge in Wiltshire, but still within the Somerset border.

Farleigh House has a rich and interesting history. The current main house was completed in around 1820 for John Houlton, a wealthy Trowbridge clothier. Over the years, the house has served as a place of residence, a school and college and, more latterly, a place of work. Its most recent owners, global 'eyewear' company Inspecs, whose brands include French Connection, carried out major renovations to the estate, including the restoration of the gardens by David Reed, brother of the late actor, Oliver.

On 14th April 2010, a press conference was held announcing Bath Rugby's intention to create a dedicated training facility at the estate.

Since then, a lot of work has been carried out to meet the planning requirements needed to convert a listed building into an elite training headquarters.

Construction work has seen the conversion of the old chapel into a state of the art gym, whilst the outbuildings are being converted into the Long Barn, which will house changing and showering facilities, a strapping area, medical centre and rehabilitation space.

Alongside the building works, the club has had constructed two full size natural turf pitches and one half size 3G artificial. The natural turf pitches were the result of some cut and fill works, ameliorating the local soil with sand and installing a primary and secondary drainage with fully automated watering system. One pitch was seeded, whilst the other was turfed.

Bath Rugby's Head Groundsman is Darren Ball, who has been at the Rec since 2005. He was solely responsible for looking after both the Rec and their old training ground. However, with the building of the new training facility, and the fact that he cannot be in two places at the same time, the club has taken on Martin Hobbs as Darren's assistant. Between them, they will look after both sites.

Martin is no stranger to the club, having previously worked for Bath and North East Somerset Council at various parks, golf clubs and sports grounds, including the Rec. During his spell with the council, he gained qualifications in sports turf management.

The new training facility has required the purchase of a range of new machinery. For this, Darren has used his long time supplier and local John Deere dealers, BS Mowers. The equipment has been provided on a five year lease and service agreement with John Deere Financial, and includes two JD 2653B triplex utility mowers (one for each facility), a JD 3320 compact tractor, a JD HPX Gator 4x4 utility vehicle, a JD TC125 core collector, and two JD R54RKB walk-behind, rear roller rotary mowers. In addition, specialist Charterhouse equipment will be used on the artificial pitch.

The Gator, as well as being a general runabout and materials transporter, will also be used on the artificial pitch to tow the Charterhouse equipment. In addition, it can be fitted with a snow blade for clearing the approach roads and lanes surrounding the site, as and when necessary.

The walk-behind rotaries are used for cutting out pitch lines and tidying up after practice, as well as for topping the pitches after reseeding.

The training pitches are cut 2-3 times a week, maintaining a height of cut at around 35mm, using the triple cylinder mower, and allowing the clippings to fly. Darren also implements a regular feeding and aeration programme to help keep the sward in good condition. A combination of granular and liquid feeds are applied to maintain colour and vigour.

The pitches are vertidrained on a monthly basis to keep them open and free draining.

Of the two pitches, the one that was seeded established really well, but the turfed one provided Darren with a few problems, which were not helped by the weather. 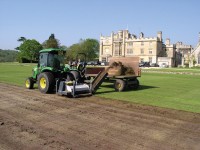 Another long time supplier, Ecosolve, whose skills Darren has been employing at the Recreation ground since he joined the club, were called in to carry out the remedial work.

This consisted of koroing off the top 27mm, followed by a pass with the Imants Shockwave. There then followed three passes with a First Products AeroVator to add cracks and fissures to loosen the surface to act as a key, and to stir the rootzone and fibres. Once that had been completed, 150 tonnes of topdressing were ameliorated in and the surface was bar graded.

The pitch was then refirmed using a lightweight roller, followed by the injection of 90 tonnes of drainage specification sand using a BLEC Sandmaster to create a tertiary drainage system that linked in with the existing primary and secondary ones.

Following the application of a pre-seed 6:9:6 fertiliser at 35gm/m², the combination of a Vredo disc seeder and a BLEC Multiseeder 2 were used to apply Limagrain's MM60 grass seed at a rate of 42 grammes per square metre 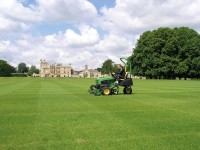 The work was completed by 1st June, with the players able to train on the pitch by 1st September.

The grass pitches are marked out using a transfer wheel line marker, usually once or twice a week depending on weather and usage requirements. The 3G artificial has permanent lines, but needs brushing after training sessions to keep the pile standing up and redistribute the rubber crumb infill.

Darren has no need to worry about maintaining the gardens as the estate employs three full time gardeners, but there are times when they help each other out and share equipment.

As for the future, Bath are awaiting various approvals to modernise the Rec which, once given, would provide a new permanent stand, hospitality boxes, conference facilities, plus other potential retail outlets. There's even talk of a brand new, state of the art pitch! 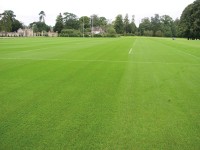 I would concur with Bruce that a well designed stadium would be a tremendous asset for the people of Bath. It would not only be a sports facility, it would offer other opportunities in terms of holding public events, conferences, concerts and many other viable services, especially if the council retained a partnership with the club. It would also continue the club's long association with the city centre retailers.

Darren has had to pinch himself at how far the club has progressed in recent years and, at Farleigh House, he and Martin are working at one of the most tranquil, unique and best equipped training facilities in Premiership rugby. Let's hope that the players respond, so that Bruce Craig's dream may be realised.