Two Trimax Pegasus rotary roller mowers are being used by John O'Conner Grounds Maintenance to fulfil a county council grass-cutting contract involving more than 120 different school and parish sites located throughout East Sussex, each site being mown on a 10-day cycle from April to October. 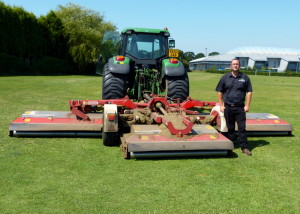 The two Pegasus mowers provide a maximum cutting width of 4.93m, folding hydraulically to 2.5m for transport. They are based at John O'Conner's depots in Bexhill-on-Sea and Lewes, each machine cutting close to 60 hectares of grass over its 10-day cycle.

According to experienced tractor driver, Barry Fisher, who was retained by John O'Conner when the firm was awarded the contract, the move to rotary mowing produced a marked reduction in downtime and maintenance with no adverse effect on quality of cut across surfaces ranging from school and college sportsfields to public open spaces and village greens. "I'm using the Pegasus to maintain the very same grass that I was mowing four years ago with cylinder gangs," commented Barry. "In my opinion, the Trimax mower produces a finish comparable to that of cylinders in dry conditions and does a much better job when the grass is wet, minimising clumping. Apart from the excellent finish produced by the Pegasus, a major benefit of rotary mowing from my viewpoint is the elimination of costly damage and downtime that can result when a cylinder mower hits a solid object lying on the ground."

Barry's comments were echoed by John O'Conner's contract manager, Jody Frampton, who pointed out that the company's mowing schedules in East Sussex now suffer from very few interruptions, enabling grass-cutting to be completed on time and within budget.

"In line with contract specifications, we are cutting at a consistent 25mm high during the main growing season, raising height of cut to 50mm from late autumn to early spring, when the grass is mown as and when needed," he said. "I like the mower for its simplicity and ease of maintenance, particularly daily greasing, belt tensioning and changing of Trimax's swing-tip blades, jobs which can all be completed quickly and safely. The Pegasus produces also a very good finish across a wide range of mowing conditions and grass lengths." 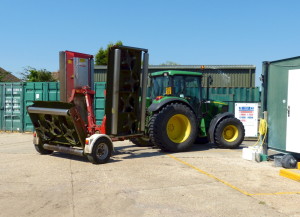 John O'Conner's workshop manager, Robert Goater, who is based at the company's head office in Welwyn, Hertfordshire, said that the firm had purchased its first Pegasus wide-area mower in 2005 and, in addition to the two machines in East Sussex, runs a further three machines on public authority contracts in Buckinghamshire and Hertfordshire.

"The low running costs and high productivity achieved by our first Trimax Pegasus mower have made the machine our primary preferred option for those contracts where rotary mowing is specified or permitted by the customer," he said. "For the East Sussex County Council contract, our past experiences of the mower's strength and reliability, plus the excellent service and parts back-up provided by dealer, George Browns, and by Trimax, made its selection a very simple choice.

"I am happy to say that our decision to go with Trimax has been vindicated further by the Pegasus's low running costs which, during the whole of 2013, were 41 percent lower than our equivalent sets of cylinder gangs."