After completing my A levels back in 2006, I went on to study chemistry at university. I have always enjoyed working outdoors and, during the first summer back from university, I did some gardening work. But, it was when I moved on the help Matt Clayton on the pitch at AFC Wulfrunians that I realised that groundsmanship is what I really wanted to do.

I soon gained a lot of experience, and it wasn't long before I was helping out with the ground at Wolverhampton Wanderers, both at the training ground and the Molineux stadium. Through this, and some other work, it allowed me to attend Rodbaston College, where I studied for an nvq in Sports Turf Management. 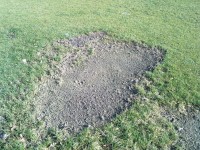 I have always been a keen sportsman myself and play cricket for Penn Cricket Club, who play in the Birmingham league. It's a popular club in the Wolverhampton area, which celebrated its centenary year in 2008.

During the off season of 2010, an opportunity arose for me to become head groundsman of the club. I was faced with quite a challenge as, not only was this my first time in charge of maintaining a sports surface, but little work had been carried out on the square the previous season and, due to a mix up, hardly anything had been done at the end of the season either. With the harsh winter we suffered, the square, to be honest, was in a bit of state.

One of the biggest problems I was faced with was some very badly damaged ends on a couple of the wickets. This resulted in me having to almost completely dig out the damged turf and back fill with fresh loam, level and reseed.

With the new season fast approaching, I did what I could to start preparing a playable surface.

Ageing equipment and a tight budget only made things more difficult. Nevertheless, as the season progressed, I was pleased with progress, and some favourable weather helped things along. Whilst also playing on the pitches, at the same time I had firsthand feedback of how the wickets I was producing were shaping up.

Along with the above, I also started working for Green Thumb Lawn Treatment Services in Wolverhampton, so I found myself working at the cricket ground every evening after work throughout the summer, along with spending a couple of full days a week at the ground.

Twelve months on, and I haven't looked back. After a fantastic season, the square and outfield look the best they have done for a few years. I have recently completed a full renovation of the square, which included scarifying, aerating, seeding and topdressing (I used Johnson's iSeed purchased from Pitchcare!).

I also have a fertilising programme in place for the coming year and the new grass was already coming through nicely in the autumn. I gave the square its early winter feed and sprayed for casting worms.

With the weather continueing to stay mild, I was able to give it another couple of cuts before the winter set in. I can then look forward to the spring when I can, again, start work on the square for the new season.

I believe I can relate, in a big way, to a lot of the topics which were raised in the last issue of Pitchcare, such as the younger generation starting up in the industry, volunteer groundsmen apparently lowering the value of the job, and first hand experience of the difference between work on residential lawns right the way through to top level sports grounds.

Being still only young in the industry, I am very proud of what I have achieved thus far.