Penzance Cricket Club has continued its ongoing support of Cornish Cricket with a generous donation of nearly £1,000 to Beacon Cricket Club. 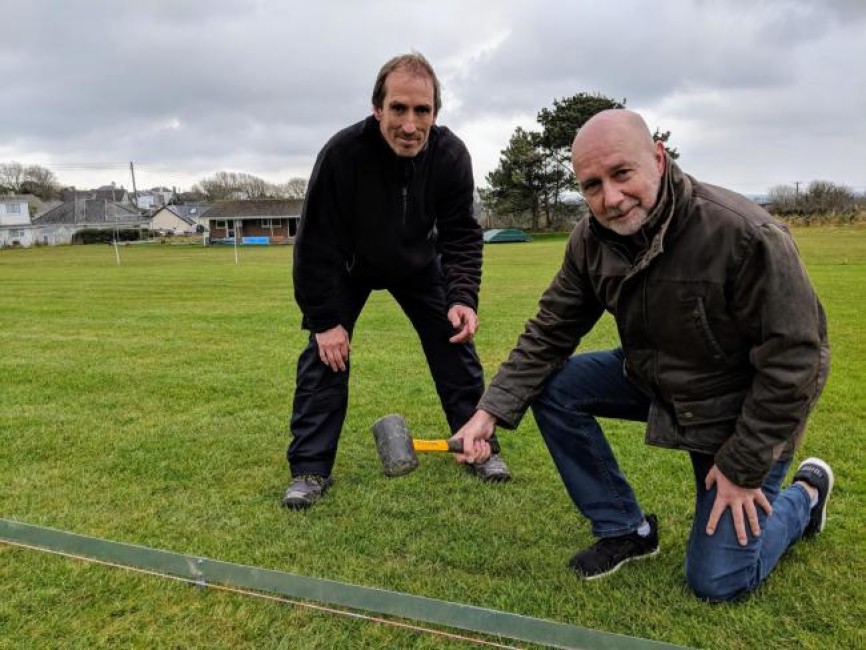 The money has been donated to allow Beacon to invest in an innovative new product known as 'Run Bund' that will help protect the ground at Tolcarne Road from wet weather and ensure the club's youth and adult teams play on higher quality pitches this summer.

The Run Bunds are designed to prevent rain water passing under the club's traditional roll-on and sheet covers, a common problem in high winds and with Tolcarne Road's iconic slope.

Beacon groundsman Colin Thomas said: "Our roll-on covers are fantastic but water passing under them is a problem. It can be very frustrating when the grounds team does everything right in wet weather, only to discover wet patches when the covers are removed. The Run Bunds are going to make a massive difference and we are really grateful to Penzance for such a generous donation."

Neil Tregarthen, chairman at Penzance CC said: "I wanted to help Beacon as I could see that the club was working hard to engage with the wider community and given it was surrounded by higher league competition, I thought it deserved some extra support. That plus the enthusiasm of the club's groundsman was a joy to see."

This donation is by no means a one off from Penzance, the club is two years into its campaign to support Cornish clubs and grow participation in cricket across Cornwall.

Mr Tregarthen added: "As a large club we have a responsibility to support the wider cricketing community and given the falling number of clubs and players, I want Penzance CC to try and galvanise those that remain."

Some recent examples of Penzance's work includes an ongoing relationship with Goldsithney CC which includes a ground share with the club's third team and Penzance 4ths, and a joint Evening League team to help encourage more players to join Goldsithney.

Perhaps most significantly, when the Cornwall Cricket League launched its Pitch Rejuvenation Programme in 2017, Penzance CC matched the £5,000 investment from the league even though the programme will support rival Premier League clubs.

With many more initiatives happening behind the scenes at Penzance CC, including the annual Big Bash tournament which has donated over £10,000 to Cornish clubs in two years, and the club allowing others use its net facilities free of charge, the drive to support the wider cricketing community looks set to continue.

Neil said: "Our vision is to ultimately win the Cornwall Premier League with at least 75 per cent of the side having come through the club's academy. Within that, we aim to produce a financially self-sustaining community cricket club that continually attracts new boys and girls to the game."