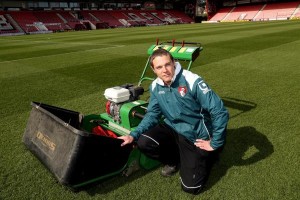 Compliments about the Cherries' fast-paced playing style have come from all quarters this season.

But even the best players need a decent pitch to play on - and at Bournemouth the job of providing the perfect playing surface falls to head groundsman James Lathwell.

Together with team members Robin Wilcox, Dan Sutherland and Dan Gonzales, the 30-year-old has produced a pitch that is the envy of many other Championship teams.

Even in mid-April, the pitch is still in near-perfect condition and it's performed so well, it is one of just three in the running to be named 'best Championship pitch.'

James, 30, said: "There's not many clubs that have come here that haven't complimented us on the pitch. Some say it's the best pitch they have been on all season.

"Just to see the players' reactions when they walk out the tunnel, it's nice because you can walk round with your shoulders back and your chest out knowing that you've produced the best pitch possible."

It's a far cry from when James first joined AFC Bournemouthin September 2009 as the sole groundsman.

"We were bottom of League Two at the time and we didn't quite have the budget that we do now. It was me, the lawnmower and that was it.

"The team used to train on the pitch quite a lot back then. One of the biggest improvements is having the training pitches because it means they're not on the pitch."

James and his team look after the stadium and training pitches, all of which need to meet manager Eddie Howe's exacting standards.

"I know what Eddie and Jason want, a certain amount of water on the pitch, grass cut at a certain height. We can give them that so every time the players run out on the pitch, they know it's going to play how they want."

"We play passing football along the ground so I need the ball to roll consistently throughout the season. It's easy during the early part of the season but in winter when nothing's growing it's tough to maintain a good playing surface."