2 Perranporth Bowling Club. What happened was … 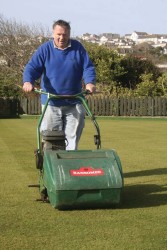 For most bowling clubs the strength of their membership is critical in terms of sustaining the club financially and functionally.
Laurence Gale MSc pops in to Perranporth whilst on holiday!

Many bowling clubs rely entirely on volunteers to help run the club. In many cases that also means maintaining the green. However, in recent years clubs have experienced a decline in membership and are finding it increasingly difficult to find enough volunteers.

The consequence of this is a loss of revenue that often results in a reduced spend on essential services and materials required to keep the green in good condition.

Based on current commercial contractor rates the annual cost for regular ongoing green maintenance - mowing, fertilising, aeration, selective weed/pest control and verticutting, plus end of season renovations - is between £8-10k.

In reality most clubs are only spending half this amount with around £500-£1000 put aside for end of season renovations. However, to help minimise outgoings many clubs will undertake the regular maintenance regimes themselves, thereby reducing their annual maintenance costs to around £2000 (£1200 for end of season work and £800 for mower repairs and servicing and materials for the green).

Perranporth Bowling Club in Cornwall is one such example of a membership driven club. They rely heavily on their volunteer workforce which is managed by a very dedicated club secretary, Irene Jones, along with Geoff Perry, their volunteer Greenkeeper.

The club is a small, friendly and privately run club. It is open to the public for a nominal fee during the summer months. Woods and shoes are available for hire.

The green is overseen by local contractor, Paul Chapman, who comes in every other Tuesday morning and carries out any spraying or heavy work that the club do not have the certification or machinery for, such as topdressing and hollow tining. Paul works closely with Geoff who, along with other volunteers, carry out the general greenkeeping duties.

Like many small clubs it has sometimes been a little difficult to recruit enough members to help with the general tidying and upkeep around the club. So, Perranporth have formed a maintenance group that will help out when the green is having its fortnightly makeover by Paul.

The club encourage members to help out with a variety of tasks from fairly heavy work like hedge clipping to lighter jobs like watering and dead heading flowers in the wall baskets. There is something for everyone to help keep the club looking neat and tidy.

Perranporth's maintenance regimes are fairly typical. The green is cut at a height of 10mm in the winter, 6mm in March and April and 4.5mm during the main summer playing season of May through to September. 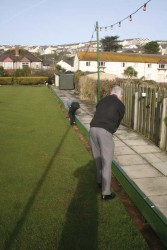 To reduce wear, a border is cut along the edge of the green with a height of 12mm in the winter and 6.5mm in the playing season. Mowing is generally carried out three times a week.

Slitting is undertaken once a month during the playing season.

Seeding is carried out with hollow tining in February. Scarifying and topdressing is undertaken in late September or early October with a further scarifying in the spring.

A granular nitrogen feed N.P.K. 6:5:18 is given once a year in early spring. A liquid nitrogen feed is given twice during the winter and monthly during the season. Chemical fungicide treatments are carried out as and when required.

Watering is carried out at around 5.00am, but only during really dry spells. The club have three pop ups that are set to rotate 180 degrees and these water for 20 minutes each, and two pop ups set to rotate 90 degrees that are left on for 10 minutes each. Each watering uses approximately 1600 gallons.
The green is dew brushed by a member of the club every morning.

Paul and Geoff agree on the level of work required for end of season renovations and implement it as soon as the playing season has finished, usually the end of September. It generally involves scarifying the green in several directions, overseeding and topdressing with a 70:30 rootzone.

There is a great work ethic within the club and their commitment is paying off with a reputation of having one of the best maintained greens in Cornwall.