1 Persistence - The act or fact of persisting

Persistence [per-sis-tuhns, -zis-] noun
1. The act or fact of persisting
2. The quality of being persistent
3. Continued existence or occurrence
4. The continuance of an effect after its cause is removed
… or so says Dictionary.com anyway 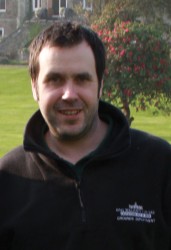 So, as you have probably gathered, I would like to talk about persistence, its place in turf care, and how it can affect you and I, as working turf practitioners.

We need not look far to see persistence in our day to day lives. To borrow from the above definitions, we could group all four together, and apply the principles to that of a fertiliser to our turf, and its ability to 'persist' in soil following its application - the same could be said for a wetting agent, soil bacteria and fungi etc, or perhaps even the persistence of thatch, despite our best efforts to eradicate it… we can even just point the finger at our turf and marvel at how it persists, often under circumstances of inordinate stress.

We can look to our fellow colleagues, and how strong relationships 'persist' through good times as bad. A model of persistence is Pitchcare's own Laurence Gale, given his unrelenting insistence on me wielding my pen for Pitchcare again, following something of a sabbatical… nothing if not persistent, eh Loz!

So, where exactly am I going with this you may well ask? Well, the greatest representation of persistence that I can refer to, is what I have seen over this last year or so in respect of turf care in the Isle of Man (yes, here I go again…).

Being a groundsman, it comes as second nature for me to moan at every opportunity, to all and sundry, and moan, cajole, poke, prod and moan some more is what I have done for a number of years now.

For those readers/members that have read any articles written by me in the past, you will note a recurring theme, which is my long standing belief that industry support was lacking on the island - this through no one's fault I may add - it was just a factor that is a by-product of our location. In this article, I hope to quash that notion, as it is clearly, no longer the case.

I have no doubts that you will all know how hard this job can be, even at the best of times, and that very fact is also what makes it such a rewarding career choice for me. However, when the job isn't going to plan, as is often the case given the amount of variables that influence our work, things can become very difficult. It is at times like these when you often need to rely on help.

Sometimes, that help can come in the form of a friendly groundsman or greenkeeper 'down the road', sometimes it can come from your employer or committee, it may even be from a local contractor but, more often than not, there is a reliance on 'industry support' to help you out … the person at the end of the phone, or on the other side of a counter when you need advice, a spare part, or even, as was the case with us earlier this year, a friendly service technician who was driving past as we were trying repair a sickly tractor, who kindly stopped and helped us to get back up and running (a fly had blocked a fuel pipe… how on earth did that happen?).

What about when you need materials, but the right one's aren't available, or good quality advice on which fertiliser to use, which seed mixture, which herbicide from a Basis qualified advisor etc.?

I have, however, managed to establish some fantastic relationships, and it is my aim to strengthen those relationships, simply because I understand the importance of them.

The relationships that we have can be wide ranging. Those we share with our fellow colleagues are fundamental to not only success, but also our lives. Those we have with suppliers is critical, as it is with local service centres, and even industry peers - I myself have to concede that I have had to 'phone a friend' on many an occasion when I have been stuck.

As employees, we also need good relations with our employers - I have worked in places where there has been a 'them and us' culture, and also where there has been a 'we' culture. Fortunately, my current place of work falls into the latter category, and that is purely based on the strength of the relationships within our department, and with our management team - the importance of relationships cannot be understated!

So, to take us back to the Isle of Man, following what is becoming an all too frequent digression from the subject matter, I would like to refer to the actual changes that I have witnessed over recent times.

With the support of local (and national) companies, I have seen a commitment to offer greater support to the practicing groundsmen over here. In March, we held the islands first ever series of educational seminars/demonstration days, which proved to be a remarkable success, and a big step forward for the island.
To follow on from that, the main sponsor, Dennis/Sisis returned to the island late in September to spend half a day on each of the island's nine golf courses and with an 'open door' policy in place, many other local groundsmen and greenkeepers were invited to attend. The typically Manx weather was, well, typically Manx, thereby rendering the first two days a complete washout. However, with some reorganisation, the show's went on, and again, proved to be very well received.

Only recently, my team and I were invited along to a John Deere training day - a fascinating day and, whilst extremely informative, I left with more questions than answers regarding bottom blade 'attitude', contact or non contact/air gaps, throw plate adjustment etc, such is my natural curiosity. My thanks go to our local John Deere agent, and Douglas Golf Club for the kind invitation. These are factors that I would never even consider, was it not for industry support.

Another local supplier has invested heavily in a fleet of maintenance equipment, which is now available for hire - this step brings a number of tasks which were beyond our reach into the realms of possibility for all. For example, I recently had the opportunity to deploy a Sisis Aer-aid on one of our playing fields with a long standing drainage problem to great effect - something that I never thought would be possible.

We now have our own Isle of Man branded fertilisers available. Seed breeders have been running trials on the island and, hopefully, the feedback from those trials will be utilised in future seed mixtures that will be made available to the wider industry.

There was a fantastic demonstration/installation of the Fleet 'Beamrider' marking system earlier in the year at a nearby school which was, again, very well attended, and we ourselves hosted a demonstration of Rigby Taylor's iGo marking machine. All of the above are things that make a fantastic difference to 'our lot' as groundsmen, and the value of such support is critical to fostering improvements.

Despite all of the above, it is imperative that we do not rest on our laurels, and we must strive for further improvements in each of the above aspects, and more, to provide more 'tools' for each and every groundsman and greenkeeper to benefit from.

We still have lots of 'irons in the fire', and I hope to be able to write again in another year or so, with news of more progress.

To bring us toward a conclusion to my musings, I would like to bring us back to persistence, and it's reflection in what I write of above. In one respect, it would have been easy to sit back and accept what was (un)available in the past, and 'make the best of it'. Whilst that is an admirable trait in certain contexts, what would have been 'easy', would have led to continued struggles on the ground.

A commitment from a number of people, over a number of years, whilst very difficult, has proven to give more options to make our collective lives as turf practitioners easier and, along with that, brought the potential to raise standards to our doorstep.

A quote that I like to refer to, and also apply in my daily life is; "Persistence of actions comes from persistence of vision" - Steve Pavlina. That is to say that, to foster improvement, you must set goals, and you must persist in trying to achieve them.

I would like to conclude this article by leaving you with the words of the 30th President of the United States, Calvin Coolidge, who can summarise the importance of persistence far better than I: "Nothing in the world can take the place of Persistence. Talent will not; nothing is more common than unsuccessful men with talent. Genius will not; unrewarded genius is almost a proverb. Education will not; the world is full of educated derelicts. Persistence and determination alone are omnipotent. The slogan 'Press On' has solved and always will solve the problems of the human race."