University of Illinois
Department of Natural Resources and Environmental Sciences

2. Quantify the relationship between the time interval from pesticide application until a runoff event and the amount
of pesticide in that runoff.

3. Determine the impact of clipping removal following pesticide application on the quantity of pesticides in runoff.

Pesticide use on golf courses has received a disproportionate amount of scrutiny from regulators and others because of the visibility of the turfgrass industry. Recently, it has become evident that runoff from turfgrasses can carry significant quantities of pesticides from treated surfaces. The purpose of this project was to examine practical means by which runoff from turfgrasses could be reduced. The construction of these runoff plots was described in previous reports. Briefly, the experimental area has a 5% downward slope and individual runoff plots were 10 by 30'(3.05 x 9.15 m). A total of ten runoff plots were used in each experiment. 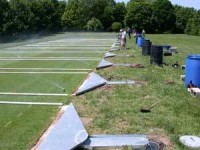 Our second study examined the interval between pesticide application and the occurrence of a runoff event. A three-way tank mix of pesticides was applied to individual plots at 72, 48, 24, or 12 hours prior to the runoff event. As might be expected, we observed a reduction in pesticide concentrations in runoff water as the period between pesticide application and runoff event increased. However, the reduction in runoff water concentration was not significant for mefanoxam, the most water-soluble of the pesticides tested.

The most water-insoluble pesticide in the experiment, pendimethalin (Pendulum®, showed a significant reduction in concentration in runoff water when runoff occurred at 24, 48, or 72 hours after application (HAT) as compared to that occurred at 12 HAT. The pesticide of intermediate water solubility, the fungicide propiconazole (Banner®), showed a reduction in runoff concentration only at 72 HAT. Thus, the trend appears that the more water insoluble a pesticide is, the shorter the time on the leaf surface needed to significantly reduce the amount of pesticide that can be lost to runoff. Conversely, the more water-soluble a pesticide, the greater the risk of runoff, even several days after application.

The final experiment examined the effect of clipping removal versus clipping return on pesticide runoff. Clipping removal reduced pesticide concentrations in runoff water by 44, 21, and 53 % for mefanoxam, paclobutrazol, and chlorothalonil. While this would appear to be an effective practice to reduce potential runoff following pesticide applications, the removed clippings are a concentrated source of pesticide and must be disposed of properly before this could be considered a beneficial management practice.