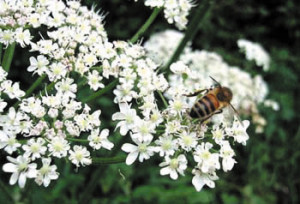 There is "clear evidence of harm" to bees, butterflies, worms, fish and birds, from the use of two pesticide types, a scientific review says.

Analysing two decades of reports on the topic, an international panel of 29 scientists found there was "clear evidence of harm" from use of two pesticide types, neonicotinoids and fipronil.

And the evidence was "sufficient to trigger regulatory action".

"We are witnessing a threat to the productivity of our natural and farmed environment," said Jean-Marc Bonmatin of France's National Centre for Scientific Research, co-author of the report entitled the Worldwide Integrated Assessment, which was released on Tuesday.

Far from protecting food production, these nerve-targeting insecticides known as neonics were "imperilling the pollinators, habitat engineers and natural pest controllers at the heart of a functioning ecosystem".

The four-year assessment was carried out by The Task Force on Systemic Pesticides, which advises the International Union for Conservation of Nature, the world's watchdog on species loss.

Neonics are widely used insecticides whose effects can be instant and lethal, or chronic.

Exposure can impair smell and memory in some species, curb procreation, reduce foraging, cause flight difficulties and increase disease susceptibility.

Used for insect pest management in farming, but also in pet flea control, they have been fingered in the recent decline in bees - crucial pollinators of human food crops - in Europe, the Americas and Asia.

The latest study says these pesticides, absorbed by plants, are also harming other insect pollinators, fish and birds as they leach into soil and water.

The most affected species were terrestrial invertebrates such as earthworms, which are crucial soil-enrichers, said a press statement.

Bees and butterflies were next, followed by aquatic invertebrates like freshwater snails and water fleas, then birds, and finally fish, amphibians and certain microbes.

"The combination of their wide scale use and inherent properties, has resulted in widespread contamination of agricultural soils, freshwater resources, wetlands, non-target vegetation, estuarine and coastal marine systems," the authors wrote.

"This means that many organisms inhabiting these habitats are being repeatedly and chronically exposed to effective concentrations of these insecticides."

Neonics can persist in soil for more than 1,000 days, and in woody plants for over a year, and the compounds into which they break down can be more toxic than the original, active ingredients.

The review, which its authors said will be published in the journal Environment Science and Pollution Research, looked at evidence of neonic damage gathered in 800 reports over the last two decades.