0 Peter and the Tiger

He may have been just a face in the crowd, but for a young Scots greenkeeper, sharing the limelight with the world's greatest golfer will be a moment to treasure and the highlight of his career so far.

Peter Avent, a 22 year old from Bonnyrigg in Midlothian, found himself virtually rubbing shoulders with Tiger Woods, after the player clinched the PGA Tour Fedex Cup and a prize of $10 million. In the picture, Peter is to the left and just behind Tiger, as he was surrounded by the multi-national staff who prepared and looked after the East Lake course in Atlanta, Georgia, for the tournament.

"He's such a nice guy", says Peter, "and getting to stand right next to him for the photographs was just awesome. It's the sort of thing you save to show your grandchildren!"

Peter worked previously at the Dalmahoy Country Club on the outskirts of Edinburgh and studied for his Modern Apprenticeship at Oatridge College in West Lothian. Last April he became the latest in a long line of Oatridge students to travel to the United States as an intern on the Ohio Program (TOP), which is run by Ohio State University to give overseas youngsters the opportunity to continue their education and widen their experience. 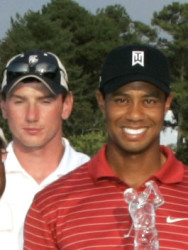 He says: "Coming over to the States as part of the Ohio programme has been the greatest experience of my life. I've learned so much and made a whole lot of friends. Preparing for the tournament was hard work, but brilliant. We worked 70 to 80 hours a week for the month before, but you are well rewarded and, of course, you get the chance to watch the golf!"

With his internship and visa due to run out this April, Peter has applied for six month extensions to both and hopes to move north to New York and a summer job at the famous Westchester Country Club. "With luck, I won't now be home until September," he says.

Mike O'Keeffe, the Irish-born manager of the Ohio Program, says: "Peter has done extremely well, like so many Oatridge lads. The College now has the reputation over here for producing top notch greenkeepers and should be very proud of it."