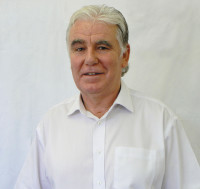 Reporting to Selina Noton, Communications and Promotions Manager, his responsibilities in this newly created role will include the management of the company's media relations together with a significant involvement in exhibition project management, especially the major industry events such as IOG Saltex at Windsor and BTME at Harrogate.

Peter has been associated with the turf care industry for the past nine years having previously managed the Ransomes Jacobsen PR account at the company's marketing consultancy, where he was also responsible for another industry account, Wiedenmann UK. He began his media-related career at Lloyds of London, where he was editor of various marine-related titles produced by the leading insurance institution before taking up positions as Studio and Production Manager at advertising and design agencies in Essex and Suffolk.

He is married to Jennifer, has two sons and lives in Brightlingsea on the north east Essex coast between Harwich and Colchester.

Commenting on the appointment, Managing Director David Withers said, "We are delighted to appoint Peter to this new role. He has worked diligently on our behalf for the past nine years and has made a considerable contribution to raising the profile of the company, not just in our industry sector, but to a broad range of publics. Having him 'in-house' will add another asset to the management team going forward.