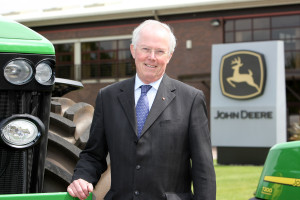 Peter Leech has retired from John Deere, after a distinguished career with the company spanning nearly 42 years.

Peter joined John Deere Limited at Langar, Nottingham in 1971, straight from Kesteven Agricultural College, where he studied agricultural engineering. At this time the company was less than six years old and held a three per cent market share.

Following initial employment as a service trainee and area service manager covering the East Midlands and Republic of Ireland, he moved to the company's Mannheim tractor factory in Germany as senior service engineer, responsible for the Americas and the UK, where he was deeply involved in the 40 Series tractor launch.

He then returned to the UK branch, initially as division service manager, then branch service manager and branch customer support manager for the UK and Ireland, with increasing responsibilities for service, parts, aftermarket marketing and training.

During this time a new training centre was established at Bingham and subsequently at the newly designed Langar headquarters, and the award-winning Ag Tech apprentice service technician training programme was launched, while parts sales grew at a double digit rate.

Peter's other notable achievements during this time included the development of the service evaluation process, which was the forerunner of many of John Deere's dealer development activities, and the UK PowerGard equipment maintenance and repair programme. He was also responsible for student and graduate trainee hiring in the UK and Ireland for many years.

Since 2010, Peter has led Deere & Company's training delivery organisation as regional training manager for Region 2 (Europe, Africa, Near & Middle East and the CIS), delivering training programmes to Deere's 26,000 dealer employees across the region through an organisation of seven training centres and a large team of instructors. He also successfully launched the new Region 2 management trainee programme in 2012.

As chairman of the AEA's training & education committee, Peter was instrumental in leading industry colleagues in the development of the Landbased Technician Accreditation scheme (LTA). For many years, he also actively participated in the Institution of Agricultural Engineers (IAgrE), and served as its president from 2010 to 2012.

His many contributions to IAgrE were recognised in 2005 by the Award of Merit and in 2013 by an Honorary Fellowship, which was presented at the Institution's annual conference at Harper Adams University in March.

Although he has now left John Deere (on May 3rd), Peter Leech plans to continue doing consultancy work and other projects within the landbased engineering sector.