by Peter Britton
in Football and People
on 03 Jul 2017

Rob Bradshaw is 'living the dream' working for Peterborough United - the team he has supported since a boy - at their Mick George Training Academy. He is a highly committed individual and, in this article, he explains how he got into the industry and what drives him to do the very best he can, and that includes supporting grassroots groundsmen. 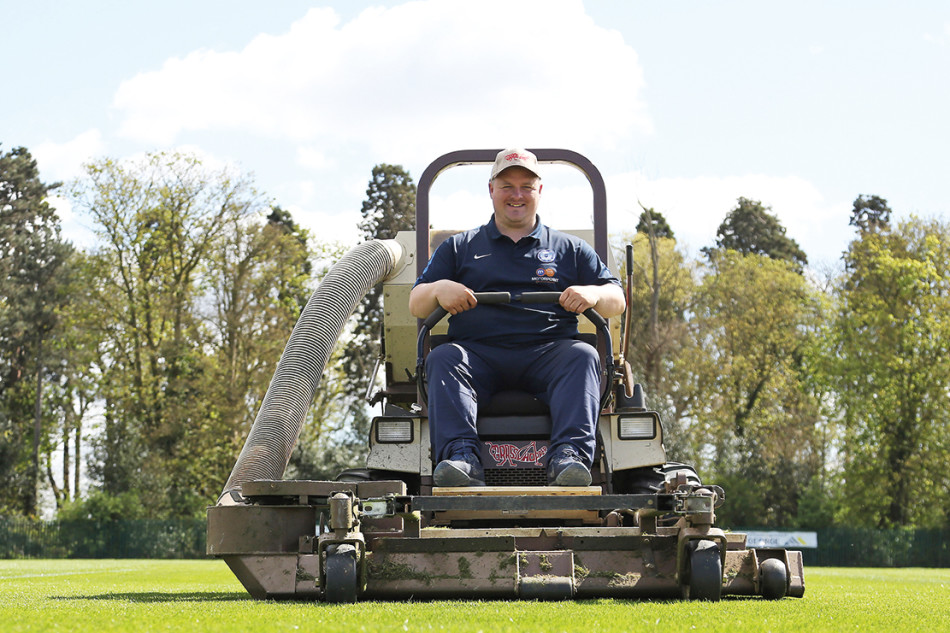 Rob Bradshaw has been in the industry since he was eighteen years old and, in that time, has amassed various qualifications including City and Guilds NVQ2 in sports turf, industry courses, including football and artificial surfaces, plus teacher training, which allows him to teach educational programmes. He now works with local colleges to educate children with learning difficulties, giving them an insight into our industry via a work experience programme.

He began his career working for Huntingdonshire District Council where he maintained twenty-four football pitches. In 2010, his passion and enthusiasm was recognised when he transferred to One Leisure, a fifty-two acre multi sports site in St Ives, as head groundsman. For close on four years, he was also a match day groundsman at Wembley. He cites his mentor as being Ian Darler, Stadium Manager and Head Groundsman at Cambridge United. "I learned an awful lot from him," he says.

Now, as head groundsman at Peterborough United's Mick George Training Academy, thirty-four year old Rob continues to display an extraordinary thirst for knowledge and a fervour for continual improvement in everything he does.

In his spare time, he will visit other football clubs locally to give advice to grassroots groundsmen, such is his passion for the industry. "The industry must realise that there are large swathes of volunteers at grassroots level and their hard work goes generally unrecognised. I really like to support them any way I can," explains Rob. 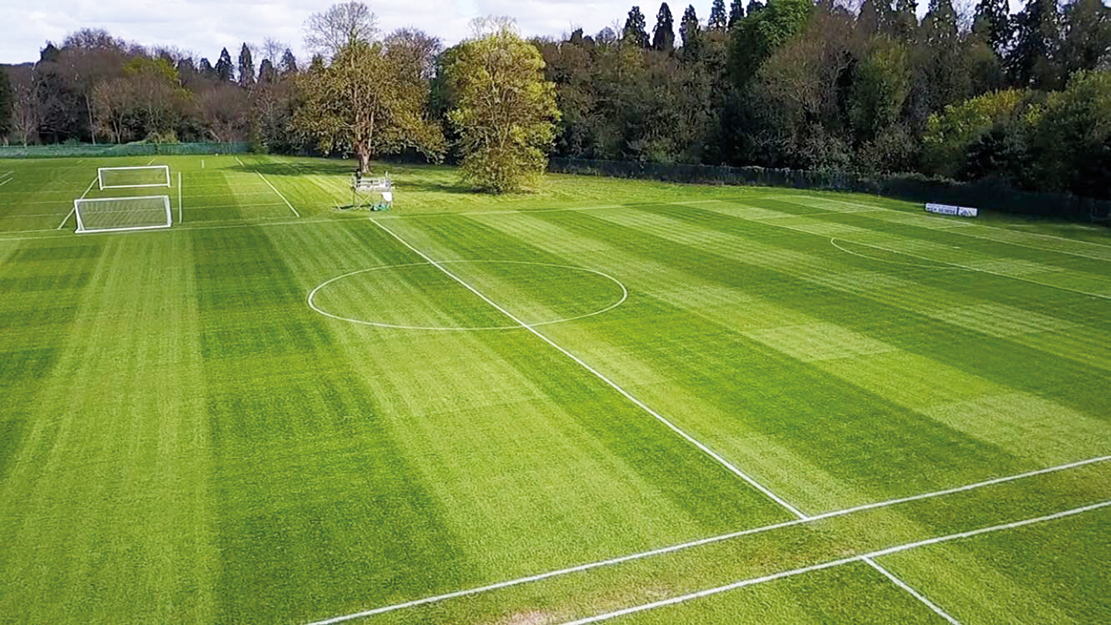 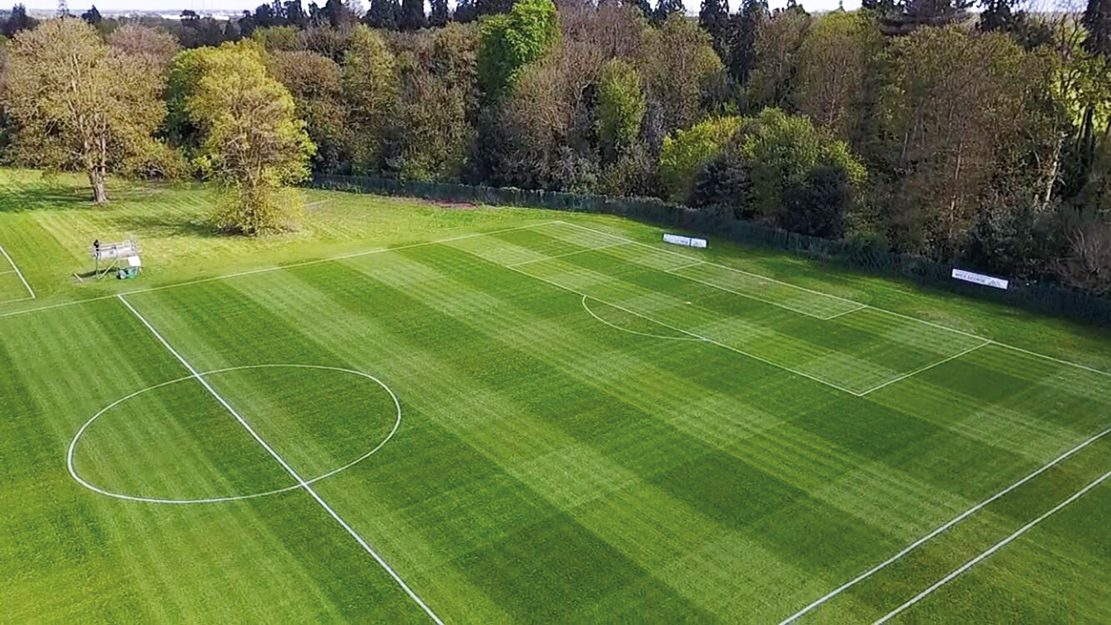 The Mick George Training Academy is home to the elite players at the club, from the 1st team down to youth. It comprises three full size sand based surfaces and various training grids and a goalkeeper area. Future plans include a state of the art 3G pitch which will be open for community use.

Rob is helped by his cousin David Clancy on a weekly basis on his day off from college. "David's help is invaluable and plays a big part in my role to keep the standards of the site high," comments Rob.

The site is heavily used and averages around 9,000 minutes per pitch, which includes games and training. This is the equivalent to 27,000 hours over the three surfaces over the season. 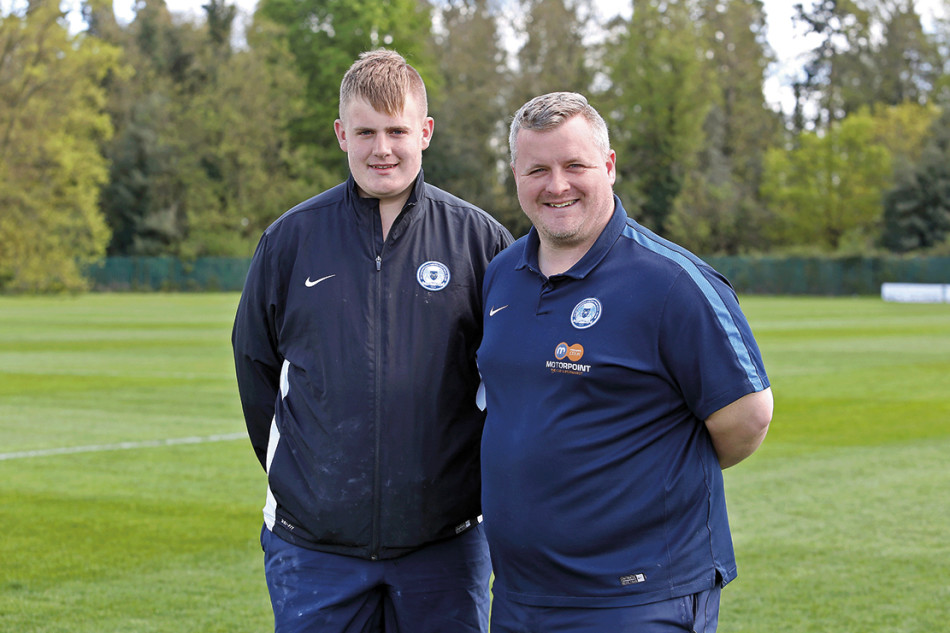 "In addition, as we are so close to the A1, we have various teams use the facilities for training sessions," Rob explains. "We have had the pleasure of France U18s training here, along with the Great Britain Deaf Football Team."

"Since my first day of employment in August 2016, the aim was to improve the playing surfaces. This has now been achieved and has led to better performance in playability, along with stronger root development. I've introduced a proper maintenance regime to the site where I can undertake the relevant operations. We are now sourcing new organic products to make the surfaces even better."

"Monthly reports to analyse the surfaces is essential, and I do this by working closely with the management staff. We all need to work together as one big team to achieve the best results." 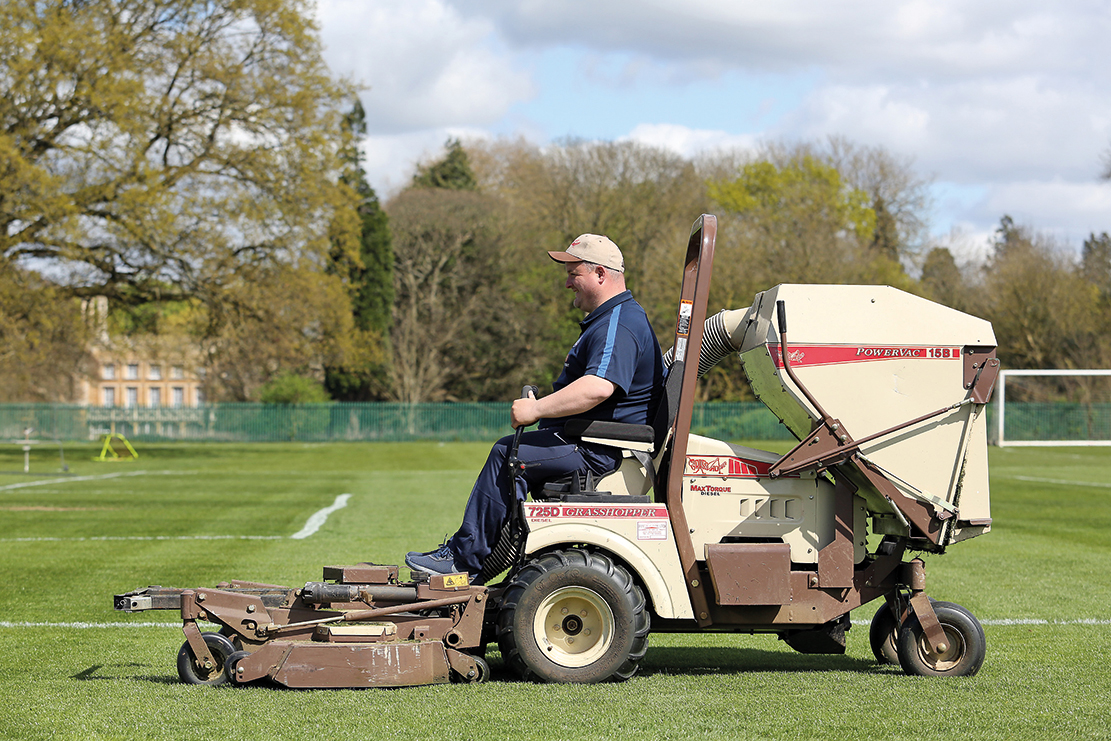 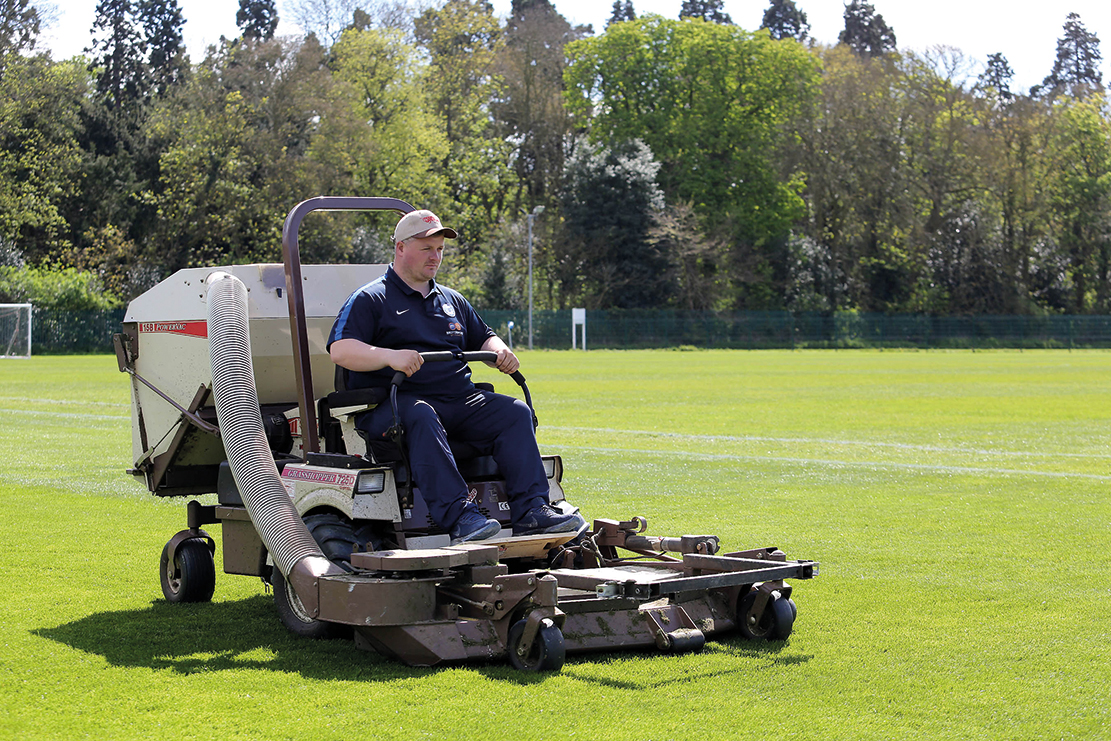 "With very limited budgets to hand, I make use of the resources to give the best possible surfaces to the team. We will now work with new budgets that I have conducted myself; they are still limited, but I believe we can still achieve great results."

"In the ten months I have been with Peterborough United, I've worked very hard and I know I'm appreciated by all at the club in what I've achieved. Being a Posh supporter for the past twenty years, it makes me proud to work for the club I've followed for so many of years."

"I go beyond my hours to achieve the best results; I think every groundsman does that when they love the job they do."

"The maintenance regime here consists of two verti-drains a year using the Cambridgeshire Grounds Association's kit. We fertilise four times a year using an organic product, which has seen the site improve 100%." 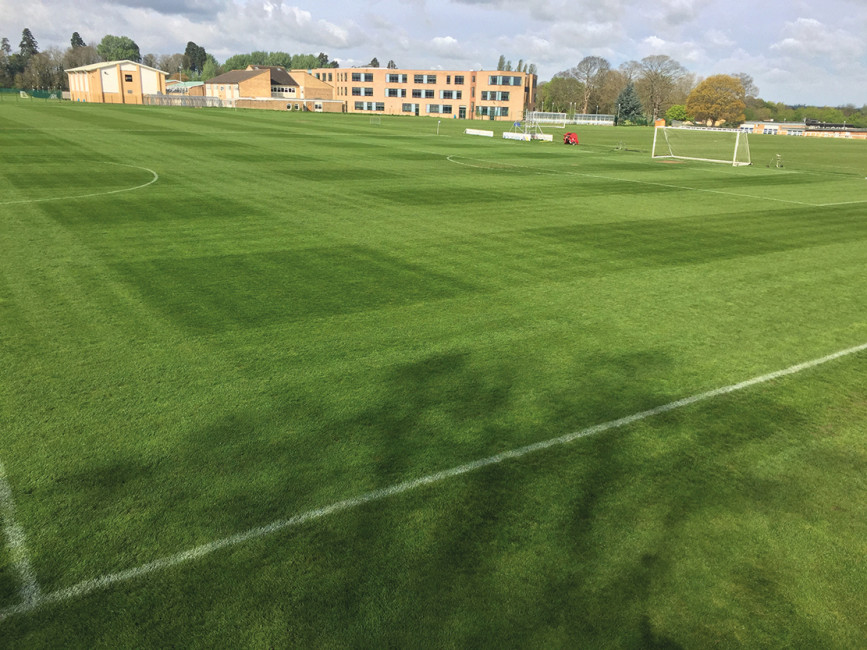 Rob continued; "Regular cutting takes place every other day using a Grasshopper 725DT, a front-mounted mower with their 15B PowerVac collection system. Presentation is the key and I have adapted this mower to improve my results. This includes the design of a frame which holds a GKB machine brush on the front to lift the pile prior to cutting. We also make use of a rubber 6ft dragmat, which we trail behind the mower to give the final finish."

Mark Silk from Working Turf is used for all contract spraying of the site. This includes pests and diseases and selective herbicide control.

Rob generally likes to use local companies as its closer to home if something goes wrong with machinery. "Fenton's of Bourne have been brilliant to me and the relationship is strong, like any other company I have used." 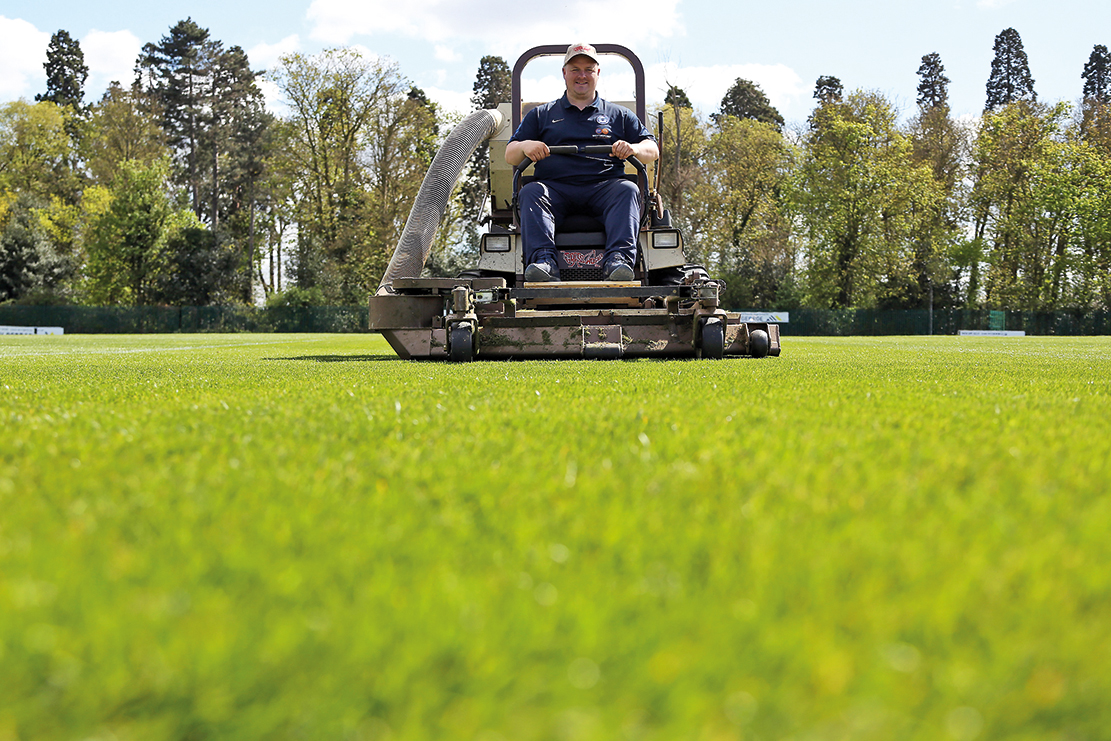 "Additional work at the training academy includes maintenance of shrub areas and lawns. I try to keep the standards high around the academy as my motto is 'presentation is the key to success'."

Moles and rabbits have been a problem in the past but, as regular overhead visitors include red kites and buzzards, the latter's population appears to have moved away!

David works at the training ground every Tuesday and offers his time voluntary, and Rob rates him as an invaluable member of the team. He has undertaken in-house training which has been instructed by Rob, and regularly attends local seminars and trade shows to boost his knowledge in the role. He looks to further his education through media clips and reading magazines like Pitchcare. This has helped him progress further and, hopefully, will allow him to take up an apprentice role in the future.

"I've dedicated a lot of my time to him to give him the best possible experience in the role," says Rob.

"We also, as a football club, invite local colleges to come in and look at the work we are trying to achieve. This is more a career move for college students to get the industry we are in noticed." 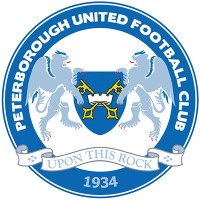 "We do offer work experience placements, which is aimed more towards children with learning difficulties. It's been a pleasure working with the colleges in improving the skills of individuals. We all face issues in life, and I believe everyone has an opportunity to learn, regardless of their disability."

"I believe the industry is moving in the right direction but, whilst I am highly respected in my current role, that's often not the case elsewhere, as I see all too often in my role as FA Pitch Adviser. I enjoy travelling across various counties advising local grassroots clubs on aspects of pitch maintenance."

"I also present educational seminars to local volunteer groundsmen. And that's what we need more of, and more involvement with schools and colleges to inject more youth into this great industry."