0 "Phenomenal" BTME is a Record Breaker 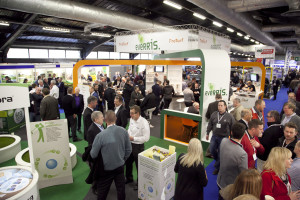 A record breaking BTME 2014 has energised the turf management industry with over eight and a half thousand visitors from across the globe packing into the Harrogate International Centre.

Full halls, a sold out education programme, new client partnerships, an audience with Peter Alliss plus a string of new initiatives to benefit existing members and attract new members have ensured BIGGA enjoyed a phenomenal start to 2014.

Tuesday saw 3,205 visitors stream in - but this was surpassed on Wednesday with a staggering 3,940 thronging the halls. Even the traditionally quieter Thursday featured 1,606 giving a hugely impressive total of 8,751 - a significant increase on previous years.

Exhibitors were deluged with customers with some calling the show the "best ever". Richard Fry, Marketing Director for Rigby Taylor, summarised the mood when he said: "This has been the best show for many years in terms of numbers and quality of visitors. We've had Head Greenkeepers, Head Groundsmen and contractors on our stand - real decision makers. The level of interest in our new products has been phenomenal.

"On Wednesday, for four hours, we just didn't stop. The adrenaline was going and it was literally customer after customer. It was absolutely superb."

The buzzing halls were complemented by BIGGA's thriving Continue to Learn education programme, which began on the Sunday prior to the exhibition and welcomed an all-time BTME record of 2,764 delegates to a varied range of seminars, workshops, conferences and presentations.

James Bledge, Assistant Links Superintendent at Royal Cinque Ports Golf Club, said: "The education has been brilliant. The 'Stepping up to Head Greenkeeper - The Realities' presented by a current Head Greenkeeper was a real eye-opener and brought to life the areas I need to work on to further my career. Every year I take away even more from Continue to Learn, the whole set up is fantastic."

The programme proved so popular that BIGGA took the unprecedented step of repeating a seminar. Steve Chappell, Head Greenkeeper at the PGA Centenary Course at Gleneagles, presented his 'Ryder Cup 2014 - The Journey Continues' seminar twice in quick succession to meet demand! The Turf Managers' Conference was another notable success with over 100 delegates attending a wide range of topical presentations and debates.

During a very eventful week, Chris Sealey, Course Manager at Chippenham Golf Club, became BIGGA's new Chairman - replacing Tony Smith who was made a life member of the Association.

Les Howkins MG, Course Manager at The Richmond Golf Club and one of the week's many Continue to Learn presenters, is the new Vice Chairman.

Chris said: "It's been a fabulous week, and what a superb way to start the year. I've spoken to turf professionals from America, Australia and all across Europe as well as the UK which just shows the global appeal BTME has.

"There's such a buzz in the halls, it's the busiest show for many years and I'm so proud of what's been achieved."

The BIGGA Greenkeepers Benevolent Fund, set up to assist current or past members and their dependents who have suffered hardships - financial or otherwise - got off to a flying start with a £2,500 donation.

They arrived at the Harrogate International Centre to a rapturous reception, and are still welcoming donations at www.bmycharity.com/HardRoadToHarrogate.

On the first day of the exhibition BIGGA also launched Xtra Benefits - a new member benefits package featuring discounts on everything from hotels and supermarkets to health clubs and mortgage advice.