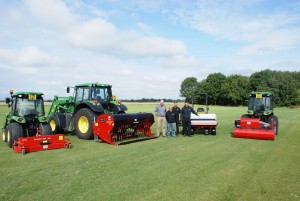 In their 16 years of operation Worcestershire based contractor, Phil Days Sports (PDS), believe they have worked on the majority of sports surfaces. From the humble village cricket square right through to premiership football and county cricket grounds.

Over that period they have accumulated a fair amount of Charterhouse kit - however recently, with the introduction of synthetic work, they have added to the list.

Toby Grace has been with PDS for about 5 years and has recently been promoted to Operations Manager. "We began to notice a trend with the bigger clients we deal with," he explained, "large sports clubs and schools were starting to get either a sand based or rubber crumb synthetic surface.

To be able to provide a service for this kind of maintenance we decided we had to invest in a range of synthetic machinery." That's when the fun started he says, "We looked at the options available and had a few 'hit and miss' demos with various suppliers before being put onto Curtis Allen at Charterhouse.

We knew them from the other machinery we have, but became very impressed with how knowledgeable Curtis was with regard to synthetic surfaces. With his help and recommendation we went on to purchase a Verti-Top Vac and an X-Treme Clean to complement the existing Rink 1210 top dresser in the fleet."

The X-Treme Clean is purposely designed for deep clean and decompaction work. As PDS only purchased in late spring/early summer 2014 they have had minimum use, but it has seen service to clean sand filled pitches. The Verti-Top has been used primarily for cleaning 3G pitches in addition to being put over a sand/rubber crumb surface after the X-Treme Clean has had a pass.

The multi-use Rink 1210 has seen its' use double with PDS using it for cricket renovation work for topdressing with sand as well as distributing rubber crumb on synthetic surfaces. Other Redexim machines used regularly include the Verti-Drain 7626 which was purchased to replace ageing aerators and Toby says "we chose it because it was the largest Verti-Drain available and has turned out to be the most frequently used piece of kit - it's a real labour saver as it gets through some serious work in a day."

Richard Lucas, of local dealer Tallis Amos, has assisted Curtis in after-sales care, which Toby says has been 'second to none'.